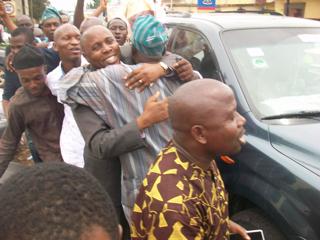 The tribunal set up to look at the legality of electoral process of legislative office holders in Lagos state, has rule that the case faulting the emergence of Hon. Ogunyemi Olanrewaju Michael of the All Progressive Congress (APC) as the lawmaker representing Ojo II constituency lacks merit, owing to want of prove.

The petitioner Tejumade Abdulrahman Muyideen of the Peoples Democratic Party (PDP) challenged Ogunyemi’s on these grounds; that he is not qualified as a candidate to contest April Lagos Assembly Election, because his party (APC) did not notify INEC 21days before their primaries and that the card readers were not used in some polling units during the Lagos Assembly Election in Ojo constituency 2.

The honourable tribunal struck out the petitioners case based on the fact that he was not able to prove the veracity of his allegations.

The card readers and result sheets were afforded in court and it was affirmed that accreditation took place in areas cited and INEC asserts that the Ogunyemi was qualified to contest and duly complied with the electoral law in the conduct of its party primary dated 18th November 2014.

The teaming crowd that accompanied the APC elected legislator could not hide their joy, having had the ruling which favours their own, the victorious lawmaker however to his time to sing praises to God amid cheering crowd who were with him in the spirit of solidarity.