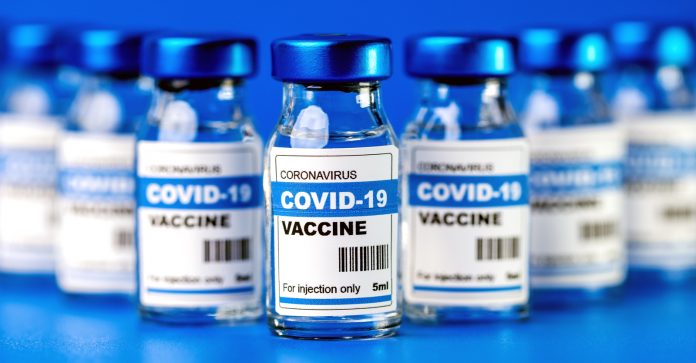 Data released today by the Centers for Disease Control and Prevention (CDC) on the number of injuries and deaths reported to the Vaccine Adverse Event Reporting System (VAERS) following COVID vaccines revealed reports of blood clots and other related blood disorders associated with all three vaccines approved for Emergency Use Authorization in the U.S. — Pfizer, Moderna and Johnson & Johnson (J&J). So far, only the J&J vaccine has been paused because of blood clot concerns.

Every Friday, VAERS makes public all vaccine injury reports received through a specified date, usually about a week prior to the release date. Today’s data show that between Dec. 14, 2020 and April 8, a total of 68,347 total adverse events were reported to VAERS, including 2,602 deaths — an increase of 260 over the previous week — and 8,285 serious injuries, up 314 since last week. 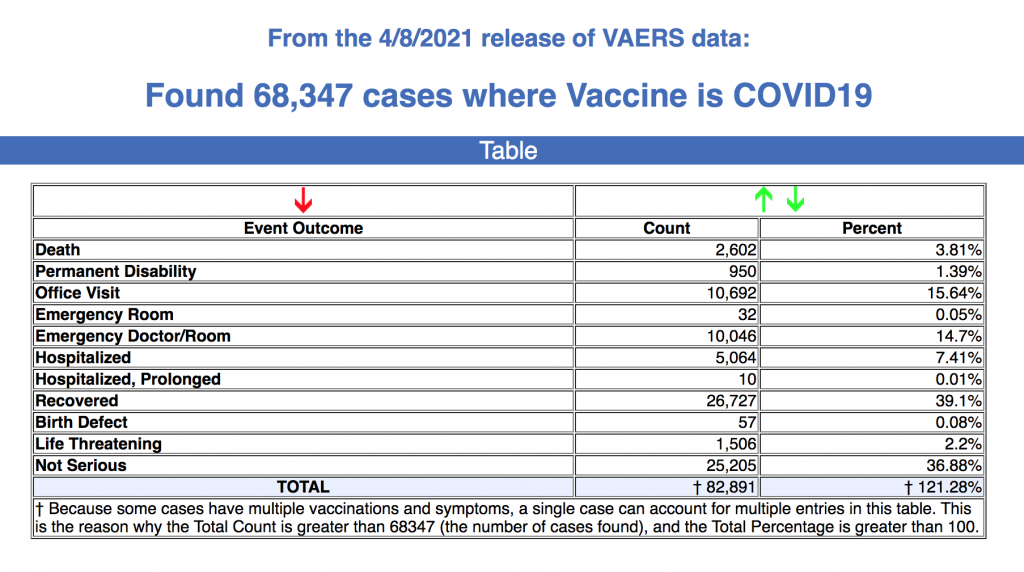 55% of those who died were male, 43% were female and the remaining death reports did not include gender of the deceased.

The average age of those who died was 77 and the youngest death was an 18-year-old. There are a few reported deaths in children under 18, but these reports contained errors.

As of April 8, 408 pregnant women had reported adverse events related to COVID vaccines, including 114 reports of miscarriage or premature birth.

There were 77 reports of Guillain-Barré Syndrome with 55% of cases attributed to Pfizer, 40% to Moderna and 10% to J&J.

Also read: 18 reasons I won’t be getting a COVID Vaccine

Children’s Health Defense queried the VAERS data for a series of adverse events associated with the formation of clotting disorders and other related conditions. VAERS yielded a total of 795 reports for all three vaccines from Dec. 14, 2020, through April 8, 2021.

Of the 795 cases reported, there were 400 reports attributed to Pfizer, 337 reports with Moderna and 56 reports with J&J — far more than the eight J&J cases under investigation, including the two additional cases added Wednesday.

As The Defender reported today, although the J&J and AstraZeneca COVID vaccines have been under the microscope for their potential to cause blood clots, mounting evidence suggests the Pfizer and Moderna vaccines also cause clots and related blood disorders. U.S. regulatory officials were alerted to the problem as far back as December 2020.

CDC ignores The Defender, no response after 39 days

On March 8, The Defender contacted the CDC with a written list of questions about reported deaths and injuries related to COVID vaccines. We requested information about how the CDC conducts investigations into reported deaths, the status of ongoing investigations reported in the media, if autopsies are being done, the standard for determining whether an injury is causally connected to a vaccine, and education initiatives to encourage and facilitate proper and accurate reporting.

After many attempts to get a response from the CDC, 22 days after our initial outreach a representative from the CDC’s Vaccine Task Force responded, saying the agency had never received our questions — even though the employees we talked to several times said their press officers were working through the questions we sent.

We provided the questions again and set a new deadline of April 7. We’ve reached out multiple times since, but the representative has not answered our emails or returned our calls.

On April 15 we called the CDC’s general media line again and were told they had our list of questions and were unsure why the representative told us she never received them. We were told the COVID response team would be informed and that we should follow up in a few days.

It has been 39 days since we first reached out and have yet to receive answers to our questions.

On April 15, The Defender reported that a healthy 43-year old man in Mississippi suffered a stroke hours after being vaccinated with J&J’s COVID vaccine. Brad Malagarie, father of seven, had received the vaccine a little after Noon and was found unresponsive by co-workers at his desk.

Also on April 15, the Cincinnati Enquirer reported that the Ohio Department of Health is monitoring the investigation into what may have caused a 21-year-old University of Cincinnati student to die suddenly last Sunday, about a day after he received the J&J vaccine.

Alicia Shoults, a spokeswoman for the state health department, said the agency is waiting for the completion of a Hamilton County coroner’s report, and “if necessary,” further guidance from the CDC.

As The Defender reported April 13, the CDC and U.S. Food and Drug Administration (FDA) called for a temporary but immediate halt to the use of J&J’s COVID vaccine while the agencies investigated the vaccine’s possible link to potentially dangerous blood clots.

In a joint statement, the agencies said the Advisory Committee on Immunization Practices (ACIP) was reviewing clinical data gathered on six women, one who died, between the ages of 18 and 48 years who developed blood clots after receiving the single-dose J&J vaccine.

On April 14, the ACIP held an emergency meeting to vote on whether to lift the pause on J&J’s vaccine or change recommendations for its use. As The Defender reported, the ACIP postponed the vote, extending the pause pending further analysis of data relating to blood clots. The ACIP said it would reconvene for a vote in one week to 10 days.

That same day, J&J revealed two more cases of blood clots — one that occurred in a 25-year-old man who suffered a cerebral hemorrhage during a clinical trial and another case of deep-vein-thrombosis in a 59-year-old woman.

In its review of J&J’s submission for Emergency Use Authorization in February, the FDA initially urged further surveillance of a slight “numerical imbalance” in blood clotting events after receiving the shot. At the time, it was concluded there was “insufficient” data to determine “a causal relationship” with the vaccine and the drugmaker resumed the trial.

As The Defender reported April 12, the rollout of J&J’s COVID vaccine has not been smooth. At the beginning of the month the vaccine maker had to throw out 15 million doses of its vaccine after they were contaminated with AstraZeneca vaccine ingredients at an unapproved manufacturing plant in Baltimore.

The vaccine maker also has been plagued with shutdowns of its vaccine sites prior to the vaccine being paused, multiple reports of COVID breakthrough cases and criticism over its CEO’s $30 million pay package while the company pays out billions for its role in the opioid epidemic.

Cases of fully vaccinated people getting COVID, referred to as “breakthrough” cases, continue to make news.

Calling it a “really good scenario,” the CDC yesterday reported 5,800 cases of COVID in fully vaccinated people. Of the 5,800 cases, 396 required hospitalization and 74 people died, the CDC said.

The CDC said it was “keeping a close eye” on the cases, but that breakthrough cases are to be expected. Tara Smith, a professor of epidemiology at the Kent State University College of Public Health in Ohio, told NBC News:

“This is a really good scenario, even with almost 6,000 breakthrough infections. Most of those have been mildly symptomatic or asymptomatic. That’s exactly what we were hoping for.”

On April 12, the Houston Health Department reported 142 breakthrough cases of COVID that occurred in fully vaccinated people since January, according to ABC 13 News. Vaccine recipients received either two doses of Moderna or Pfizer, or one dose of J&J. The report ruled out those who were said to have contracted the virus 45 days before their second scheduled shot date.

Houston Health Department said there were 2.46 positive cases out of every 10,000 fully-vaccinated people and it was unclear if those who tested positive contracted the original strand of COVID or a newer variant.