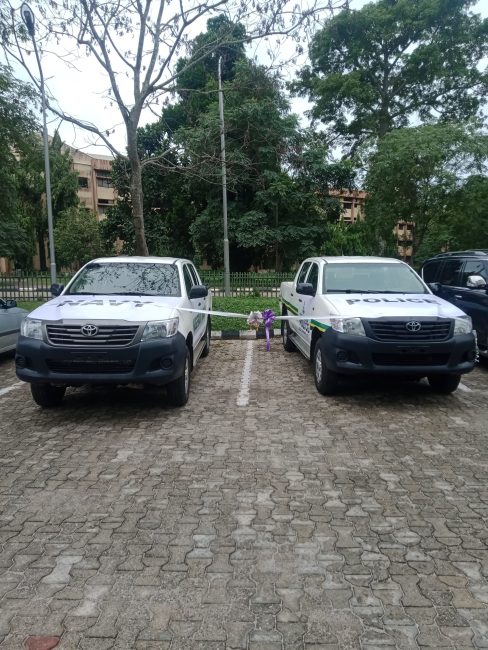 The Vice-Chancellor of Covenant University, Prof Abiodun Adebayo, while presenting the vehicles in Ota, Ogun, said the donation was part of the university’s community service mandate and corporate social responsibility to the society.

“We cannot overemphasise the importance of law, security and order because they boost investment decisions,” he said.

The Vice-Chancellor noted that providing security was vital to having a secure environment to engage in any meaningful socio-economic activities.

He said the country had witnessed unprecedented level of insecurity such as banditry, kidnapping, Boko-Haram, among others in recent times.

“This development has made national security a major issue for the government, which has prompted huge allocation from the national budget.

“In spite of the federal government’s efforts to tackle the menace, the level of insecurity is still high in the country.

“There is need to equip the security agencies, like Navy and Police with adequate and appropriate communication tools so as to effectively implement government’s security measures,” he said.

Adebayo called on individuals and cooperate organisations to support the nation’s security agencies in whatever form to stem the wave of insecurity in the country.

He said the university and Living Faith Church were delighted to donate the vehicles to both the Navy and Police, adding that this would assist in confronting security challenges in Ota and environs.

George appreciated the Chancellor and management of Covenant University and Living Faith Church, for the huge investment in CDIIC projects.

The don said the university was committed to making a difference through its community impact initiatives.

Golu said the Navy was grateful for the good gesture, which would help the society to be better governed, adding that the vehicle would boost operational efficiency.

ACP Mohammed Musa, Area Commander, Nigeria Police, Ota Command, said the donation of the operational vehicle would go a long way to solve some of the logistics problem facing the command.

Musa thanked the Living Faith Church and CDIIC and promised that the vehicle would be maintained in order to render quality security services to the society.