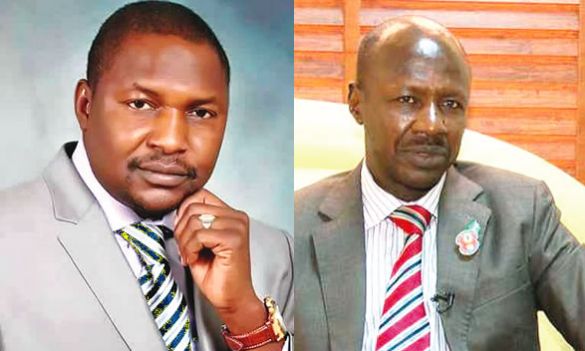 Share this on WhatsApp
Spread the love
Heads of the nation’s anti-graft agencies may have been on warpath with AGF and Justice Minister Abubakar Malami for refusing to furnish the minister with the case files of over 35 former governors and senators requested for since 2016.
Special Assistant to the President on Prosecutions Okoi Obono-Obla said Saturday EFCC’s Chair Ibrahim Magu and ICPC’s Ekpo Nta might be reported to the presidency for their stubbornness.
Among the files the duo refused to release are those of  former Governors Bukola Saraki, now Senate President; Ali Modu Sheriff),  Godswill Akpabio, Orji Uzor Kalu, Chimaroke Nnamani , Saminu Turaki, Sule Lamido (Jigawa, Joshua Dariye, Ahmed Yerima, Gabriel Suswam, James Ibori, Peter Odili, among.
Almost all of these suspects are already in the Senate.
Stella Oduah and George Akume also have theirs.
According to Obono-Obla, the two anti-corruption agencies’ failure to forward the files to the AGF since July 2016 when the request was made has caused a setback to the anti-graft campaign of President Muhammadu Buhari’s administration.
“You remember that former EFCC chairman, Nuhu Ribadu, had told the National Assembly at a time that 32 former governors were being investigated by the commission,” he said. “We demanded the reports so that we could file criminal proceedings against those ex-governors indicted in those reports. I also made a similar application to the ICPC, but they refused to comply.”
ALSO SEE: Exposing Nigerian President to ridicule
He added that the special team set up to handle all high-profile corruption cases wanted to get those files, and file an order of interim attachment of properties belonging to the suspects under investigation.
“This is because under Section 28.4 of the EFCC Act, when suspects are arrested, the commission attaches all the properties acquired under that financial crime.
“So, we wanted to really wage a war, get those files and carry out those attachments so that Nigerians will know we are really serious about this war on corruption. And disappointedly, they refused to hand over those files and have refused to work with the AGF.”
He noted that Malami is the chief prosecutor of the country and I see no reason why agencies under his supervision should not cooperate with him.
“The AGF is bothered and he may likely take a definite position. What the bosses of the agencies have done amounts to insurbodination under the public service rule because the AGF is a chief legal officer and the agencies under him are to respect him. The AGF’s position may be to report the heads to the Presidency.”
However, the  EFCC’s Head of Legal Department, G.K. Latona,  had last week denied claims that the commission was not cooperating with the AGF.
“We are not working at cross purposes with the office of the Attorney General of the Federation; we are cooperating with them. We have a wide range of corruption cases in concert with state agencies,” he said.
“The Attorney General’s office has the right to initiate new high-profile corruption cases and investigate them without waiting for cases initiated by the EFCC. We are also working on best practices manuals for the prosecutors and investigators. If we want a corruption-free society, we must all work towards it.”
Malami and Magu belong to two opposing power centres within the presidency—the reason many observers claim the agencies are suspicious of the AGF.
The Senate leadership and Buhari’s CoS Abba Kyari and the DSS (all of a clique) have been doing all they can to frustrate Magu’s appointment as the EFCC’s substantive chairman.
And the case files might just be the ace Magu has to fight his own battle, analysts believe.
Share this on WhatsApp
Related Topics:Anti corruption fightEconomic and Financial Crimes Commission (EFCC)Ekpo NtaIbrahim MaguIndependent Corrupt Practices and Other Related Offences Commission (ICPC)Justice Minister Abubakar Malami
Up Next

Thugs attack Sani, others in Kaduna