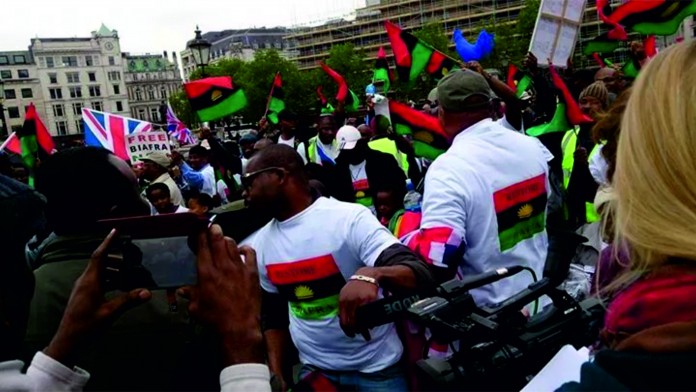 National Daily investigation unveiled plans by leaders of MASSOB in the South East, seeking collaboration with leaders of the Niger Delta militants in the South-South to surreptitiously commence the process of building regional army towards actualizing their demand for self-autonomy in their respective domains. Invariably, the plot has the potential danger of taking their protests and arms struggle to higher pedestal which may snowball into civil strife.

The emerging arrangement in the South East is part of the build up to the 50th Anniversary of the Biafra State which is coming up in May 2017. Those involved in the arrangement revealed that 50 years is always an epoch in world history. They stated that the since the concept of Biafra has refused to die in Nigeria’s political history since the Nigerian Civil War ended on January 1, 1970 after the Biafra Republic was declared on May 30, 1967, by late General Odumegwu Chukwuemeka Ojukwu, the 50th year may mark a turn of event. They expressed that optimism that the spirit of Ojukwu may rise on May 30, 2017, consummate the independence of the Sovereign Biafra State.

They disclosed that the time has come to take the struggle for the actualization of the Biafran State beyond street protests, declaring that when they eventually succeed in realizing the Independent State of Biafra, they will require well organized Armed Forces to protect the territorial integrity of their new country. They said that they cannot wait until the struggle succeeds before preparing for their protection.

It was revealed that arrangements are being made to secure military training in two countries of the Middle East (names withheld). However, it could not be confirmed at the time of this report if the home governments of these two countries approved of the training programme but some syndicates were revealed to have been engaged to facilitate the entire process.

The syndicates, according to our investigation, will facilitate all the diplomatic protocols and ensure that qualified personnel from the various armed forces take the recruited persons through rigorous trainings of global standard of military skills.

The organizers intend extensive trainings in the army, navy, air force, including intelligence and the police. The syndicates have the responsibility of ensuring that these boys move in and out of the countries without being detected.

Findings further revealed that the project is funded by Igbos in Diaspora and some businessmen.

National Daily investigation found that leaders of the pro-Biafran state considered regional army important after the incidence of Monday, May 30, 2016, when defenseless Igbo people on peaceful procession to mark the 49th anniversary of the Biafra were killed by an army battalion from the 82nd Division of the Nigerian Army at Nkpor, Onitsha, Anambra State.

In that incidence, the 82nd Division, Nigerian Army had explained that the army acted in self-defence and to protect the strategic Niger Bridge by invoking the extant Rules of Engagement (ROE).

The Army had in a statement by Deputy Army Public Relations Officer, Colonel H. A. Gambo, highlighted inter alia: “Due to the widespread panic, tension and apprehension that generated from the activities of MASSOB and IPOB members, security agencies which comprised detachments of the Nigerian Navy, Nigeria Police, Department of State Service, National Drug Law Enforcement Agency, NDLEA, were compelled to intervene, in consonance with constitutional provisions of aid to civil authority where and when such occasion demands… However, the MASSOB/IPOB members, who had earlier assembled at a school location on Ataa Road, near Saint Edmund’s Catholic Parish, Maryland, Nkpor-Agu in Anambra State resorted to fierce attack against the intervening security agencies that were carrying out their legitimate mandate. The nature of this attack involved brazen employment of various types of fire arms and all sorts of crude weapons, volatile cocktail such as acid and dynamites. Instructively, troops of 82 Division Nigerian Army, as the lead agency of the security agencies, had to invoke the extant Rules of Engagement (ROE) to resort to self-defence, protection of the strategic Niger Bridge, prevent re-enforcement of the pro-Biafran members apparently surging ahead from the far side of the Niger Bridge at Onitsha.”

The Army acknowledged that five members of MASSOB/IPOB were killed, eight wounded, while nine were arrested; while saying that the event was to mar the first anniversary of the present democratic government.

An observer of the creeping violence in the South East and the Niger Delta had cautioned of the potential dangers. He admonished that that Nigerians should not make the mistake of misconstruing the crisis as a Peoples Democratic Party (PDP) versus All Progressives Congress (APC) or North Versus South conflicts “but a wakeup call to all parties involved in the ongoing carnages in the Southern and Eastern parts of Nigeria to thread with caution.”

The observer warned that many reasons were adduced for the Rwandan crisis but the commonest was the narrative of hatred that spread like wildfire between the country’s two major tribes. He noted that in the ensuing confrontations, security agencies were reported to have taken side with the government at the centre, hence, the unprecedented genocide. “In our own case, the situation is much more complex and complicated by the reason of our multifarious tribal divergences,” he declared.

The observer narrated that in the last one year, tens, if not hundreds of people had been reported dead from confrontations between members of IPOB and State security agencies.

The Niger Delta is not left out in the blood spilling as unconfirmed reports allude to killings arising from hostilities between locals who are regarded as militants and security operatives deployed to foster peace in the troubled region.

The IPOB Media and Publicity Officer of IPOB, Emma Powerful, countered the claims of the Nigerian Army, saying that group raised alarm that the military were going to attack its members and other Igbo people during the 2015 Biafra Day, lamenting that “no action was taken to prevent the attack on people, who were not armed in any way.”

Powerful had insisted that, “IPOB under the leadership of Mazi Nnamdi Kanu does not carry any weapon, whether dangerous or not. That is why even the clergy, doctors, lawyers and people of diverse professions can identify and show solidarity with us. We, therefore, condemn the killing of unarmed IPOB members and other Biafra agitators at Nkpor and Onitsha.”

Accordingly, the pro-Biafra groups vowed to take up arms towards the secession of Biafra. The MASSOB, in a statement by Uchenna Madu had declared: “We condemn the brutality and the unprovoked killing of non-violent Biafran agitators during the annual anniversary of Biafra declaration, mostly in Anambra State. The animosity of Nigerian soldiers and other security agents has been shown on the attack on armless Biafrans. This shows their primitiveness and unprofessionalism in discharging their duties. It also shows the high level of ethnic, religious and pathological hatred against the people of Biafra by the Nigerian Government. The brutal onslaught against the people of Biafra is an indirect call that the non-violent Biafran agitators should start the militant way in Biafra restoration. We will, therefore, answer that call.”