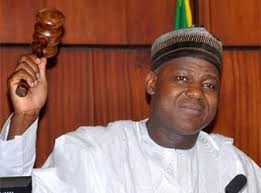 House of Reps Speaker Yakubu Dogara announced Wednesday that copies of the 2016 budget proposal the Senate claimed was stolen were on display by the Clerk, Mohammed Sani-Omolori, during the plenary for lawmakers to take their copies.

Announcing on behalf of the chairman of the appropriation committee, Dogara said the copies will be given to legislative aides on presentation of their ID cards.

President Muhammadu Buhari presented the proposal December 22, the first time in years a president would come into the NASS to present a budget proposal.

Dogara lamented that the rumours on the budget had taken different forms with some alleging that the office of the Clerk of the National Assembly was broken into.

“None of their offices was broken into, but on social media, it is there that the budget has been stolen, and some newspapers also published that. It is necessary to clarify before going to press with such stories,” he said.