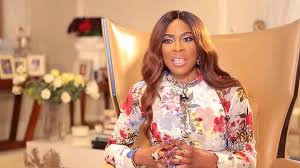 Share this on WhatsApp
Spread the love
Mo Abudu is the featured guest on this week’s episode of CNN African Voices. The 30-minute magazine programme premiered on the Cable News Network on the 22nd March 2017 at 9:30 a.m (WAT), with repeat editions scheduled on Monday 27th March (10:30 a.m) and Tuesday 28th March (4:30 a.m.).
Mo Abudu is an award-winning media mogul previously described by Forbes Magazine as one of Africa’s most successful women post-launching of EbonyLife Television in July 2013. The station is regarded as “Africa’s first Global Black Multi-Broadcast Entertainment Network”.
Joining her on the programme as second guest is Siba Mtongana, a South African celebrity chef and host of the Food Network show “Siba’s Table”. She is currently a judge on “Chopped South Africa”, a hugely popular cooking competition in South Africa.
CNN refers to Abudu as a successful woman driven by “perseverance, passion, and positivity” adding that the EbonyLife TV Chairwoman takes viewers “behind the scenes of her empire to see how she creates content that has audiences in Africa and abroad clamouring for more”.
On describing the feature, Ms Abudu said “This is a big moment for the entire EbonyLife TV team and our stakeholders.  So many people have been an integral part of our story – MultiChoice Africa, our sponsors and advertisers, and of course, our loyal audience of millennials. A big thank you to CNN for giving us the opportunity to share our story with the world…”
The CNN feature comes as EbonyLife TV moves into its fifth year as the channel of choice in the entertainment category with the expansion of its operations to more Nigerian cities, including Abuja, Lagos and Calabar. The channel today announced its new programming line-up beginning 3rd April 2017, including a slate of Nollywood’s best films, EbonyLife original series and new shows that meet viewer demand for more story-driven content.