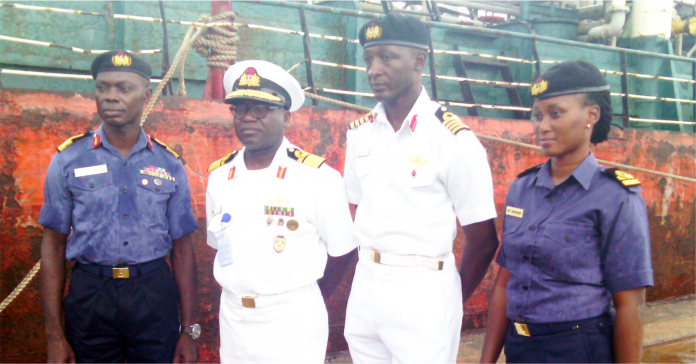 DISTURBED by the need to ensure that the activities of pirates are wiped out from the Nigerian waters and by extension in the Gulf of Guinea, the Nigerian Navy has successfully recovered MT Dejikun, an oil vessel used in the hijack of a merchant ship MT Maximus off the coast of Cote D’Ivorie in February, 2016.

The owner of the ship, one Mustapha Gani, and another unnamed man, who was said to have chartered the ship before she was used for the hijack operations have also been arrested by men of the Forward Operation Base (FOB), Badagry.

The MT Dejikun was earlier recovered by the Beninnois navy after she was anchored and abandoned off their coaster waters by the suspected pirates realising that the ship they had used her to hijack was rescued by men of the Nigerian Navy, arresting five of the pirates and killed one in the process.

The Flag Officer Commanding (FOC), Western Naval Command, Rear Admiral Ferguson Dukas Bobai, who received the ship at the Naval Dockyard Jetty, Victoria Island, after being tolled into Nigeria from the Republic of Benin, said the ship was needed by the Nigerian Police to enable them prosecute the pirates that have been handed over to them.

“We are here to receive this ship MT Dejikunthat has been tolled in from Cotonu, Republic of Benin. Precisely, on the 11th February, 2016, a ship called MT Maximus was hijacked off the coast of Cote D’Ivorie by some suspected pirates and they took the ship towards Sao Tome and Principe; about 320 nautical miles off the coast of Lagos.”

Admiral Bobai explained that due to regional collaboration, Nigeria was able to rescue MT Maximus. However, the most important thing about MT Dejikun is that she was the ship that was used as a landing pad to attack and hijackMT Maximus.

“On rescue of MT Maximus, the crew on boardMT Dejikun got wind of it and they navigate the ship off the Coast of Benin Republic, anchored and abandoned her after they had vandalised and removed what they thought were of importance.

“The Beninnois Navy discovered the ship that she was anchored in their waters and nobody was on board. They boarded the vessel and took custody of her. Through cooperation with the Beninnois Chief of Naval Staff during the Golden Jubilee anniversary of the Nigerian Navy, we were able to able to fast track the process of bringing the ship to Nigeria.”

The FOC West also revealed that during investigation, the Beninnois navy were able to get some documents that revealed that the owner of the vessel, who was a Nigerian, one Mr Mustapha Gani. As a result, the Beninnois tried to get him to Benin Republic but he refused to honour their invitation.

“However, through collaboration, our personnel from the Forward Operations Base (FOB) Badagry, we arrested Mustapha at the Seme border, Bobai added.

Giving the importance of bringing MT Dejikunto Nigeria, Rear Admiral further explained that “Those that were handled over to the police are about to be prosecuted and the police needed the vessel as one of the exhibits to be used to assist in the prosecution those pirates arrested.

On how many crew members have been arrested since the rescue of MT Maximus, the FOC added that “Mustapha was arrested as the owner of the ship and is in our custody. The person that chartered the vessel from Mustapha has also been arrested and is in the custody too. The vessel was empty as at the time the Beninnois navy found her.’

To assist the police in its prosecution, they wrote us that they need the vessel, and our duty is to fetch her from the Beninnois police for the Nigerian police and that is what we have just done to assist in the prosecution of the arrested suspects. The police have their procedure of charging people to court and prosecuting them.

As the Flag Officer Commanding, Western Naval Command, I have brought in MT Dejikun and would be hand her over to the police who have the legal capacity and authority to prosecute whoever that is involved in the hijack of MT Maximus.

We sent our men to Benin Republic on Monday and they tolled her across the night and anchored on Wednesday and would continue from here.

Apparently, when they got the ship, they were able to get some documents during their investigations that revealed that the owner of the vessel was a Nigerian, one Mr Mustapha Gani. They tried to get Mustapha to Benin Republic, he refused. But through collaboration, our personnel from the FOB Badagry, arrested Mustapha at the Seme border.

‘The importance of bringing this ship here is that those that were handled over to the police are about to be prosecuted and the police need the vessel as one of the exhibits to be used to prosecute those pirates that we arrested. Mustapha is in our custody.
Rear Admiral Bobai added that in compliance, they sent their men to Benin Republic on Monday and they tolled the vessel across the night and anchored on Wednesday morning.

It would be recalled that MT Maximus was hijacked by about 16 pirates who had boarded the oil vessel off the Coast of Cote d’Ivorie, Abidjan and immediately changed her name toMT Elvis . As at the time of hijack, the South Korean hired ship was conveying 4, 700 metric tons of AGO.

With the deployment of NNS Okpabana complemented by NNS Sagbama and Centenary blighted life out of one of the pirates and arrested Captain Mike Ogborama, Ayo Joshua, Marcus Adesoji, Adeyemi Paul, Oluwafemi Samuel and Collins Friday.