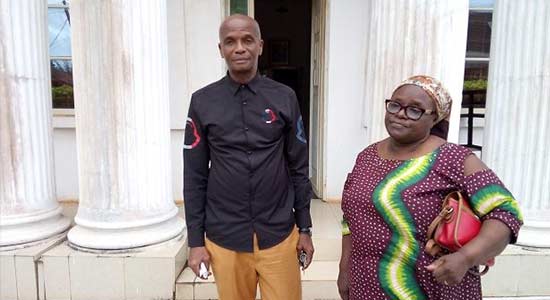 THE son of deceased music maestro, Sir Victor Uwaifo (MON), Goodman Uwaifo debunked speculations that his father, who passed on in Benin on Saturday at the age of 80, died of COVID-19.

He spoke in Benin while in the company of his sister, Mrs Evelyn Oghonmwen, insisting that his father died from pneumonia complications and not COVID-19.

Goodman, the third son of the music icon, said the elder Uwaifo was rushed to Stella Obasanjo Hospital in suburban Benin on Friday and passed on at about 4pm from pneumonia.

He said, “It is not true; he died of pneumonia and not COVID-19. He was rushed to the hospital on Friday and passed on the following day on Saturday August 28. We did the necessary tests. He was treated for pneumonia.”

In deep distress, the younger Uwaifo, a pastor with Image of God Bible Ministry, Benin, confessed that he had yet to come to terms with the loss of his father but had been able to weather the storm because of his strong faith in God.

Meanwhile, the Ekiti State Governor, Dr Kayode Fayemi, has expressed his condolences to the family of Victor Uwaifo.

Fayemi described the late Uwaifo as a legend, adding that his death marked the end of an era where music was deployed to exhibit rich culture and traditions, teach morals and preserve the native language.

The governor, in a condolence message by his Chief Press Secretary, Yinka Oyebode, said, “The deceased was able to forge an uncommon synergy between town and gown by deploying his academic knowledge to the promotion of Nigeria’s cultural heritage in the form of music.”

Similarly, the Edo State Deputy Governor, Philip Shaibu, the management of the University of Benin and the member representing Ovia Federal Constituency, Mr Dennis Idahosa, described the death of Nigerian highlife crooner as a huge loss to the entertainment industry and the country in general.

Shaibu said, “The death of Sir Victor Uwaifo has suddenly closed an era in the African, Nigerian and Edo musical scene. He brought pride and glory to old Bendel and Edo State, as a worthy son and ambassador through his magnetic live performances.”

Prof. Lilian Salami, UNIBEN’s Vice Chancellor, said in a statement that the university community would miss Uwaifo’s uncommon mastery of the arts.