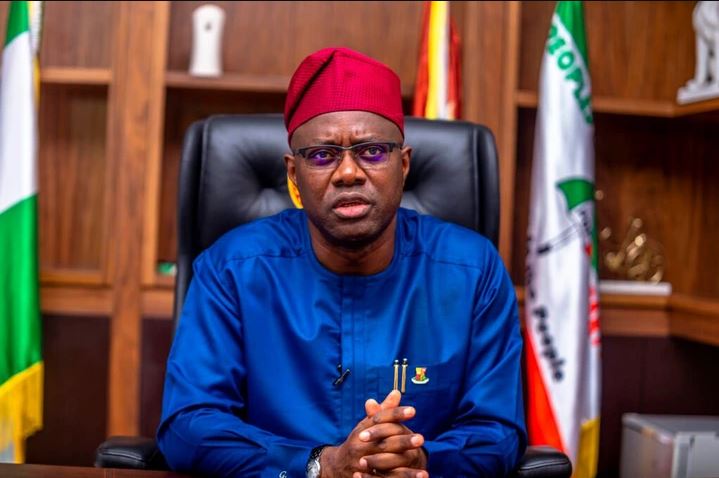 Gov. Seyi Makinde of Oyo State, says the economic policies of his government in the last three years has yielded positive results and impacted on the citizens.

Makinde made the declaration on Tuesday in Ibadan, while presenting the scorecard of his administration in the last three years.

The governor spoke in a state broadcast, commemorating the third years of his administration in office.

Makinde commended the residents of the state for their supports, patience, understanding and for trusting his government to deliver on its promises.

The governor said that his administration would continue to consolidate on the gains already recorded in the education sector, road infrastructure, agribusiness, among others.

“The gains already recorded by my administration in the last three years include: construction of several roads that have impacted positively on the economy of the state through the creation of a thriving environment for private sector players in the state’s agribusiness sector.

“The increased private sector participation in the agribusiness sector has enabled the state to attract N23 billion in agribusiness investments, as well as securing another 125 million dollars in development partners-blended finance for rural roads, agro logistics, market and industrial hubs.

“All these have contributed to providing direct and indirect jobs to residents of the state.

“In addition, the state has also trained close to 4,050 youths in agribusiness, 98 of whom have started their businesses, while the state is set to support others in diverse agribusiness enterprises,” the governor said.

According to him, as we review the past year, we are thankful that our administration’s economic policies in the past three years are yielding the desired results.

“We have always said we believe in data, science and logic.

“The data we have has shown that our resources as a nation have dropped, especially with dwindling oil prices and there was a need to focus on raising our Internally Generated Revenue (IGR).

“Back then, Oyo State was generating less than N1.7 billion a month.

“Our plan based on this data, was to focus on projects that would yield the revenue needed to reduce our infrastructure deficit,” he explained.

Makinde also said that his government would now move on to fix inner and feeder roads to make inner-city travels to be stress-free for residents, “having been executing road projects that improved access and connectivity between the zones in the state”.

In the education and health sectors, Makinde said that his administration had constructed 56 model schools in three years.

He said that the administration had also completed the renovation of 200 Primary Healthcare Centres in its drive to ensure the existence of at least one functional PHC in each of the 351 electoral wards of the state.

In area of security, Makinde said his government had been able to bring crime rates down by equipping security agencies, adding that the state government handed over 100 operational vehicles to the state security outfit, Amotekun, recently.

He said the government also embarked on the recruitment of 500 additional personnel for the corps, and was working hard to ensure security in the state.

The governor promised that his administration would keep on executing policies that would reduce the burden on its people.

He disclosed that his government had secured 125 million dollars in development partners-blended finance for rural roads, agro logistics, market and industrial hubs.

Makinde promised to consolidate on the gains of the last three years in the remaining one year left for his first tenure.