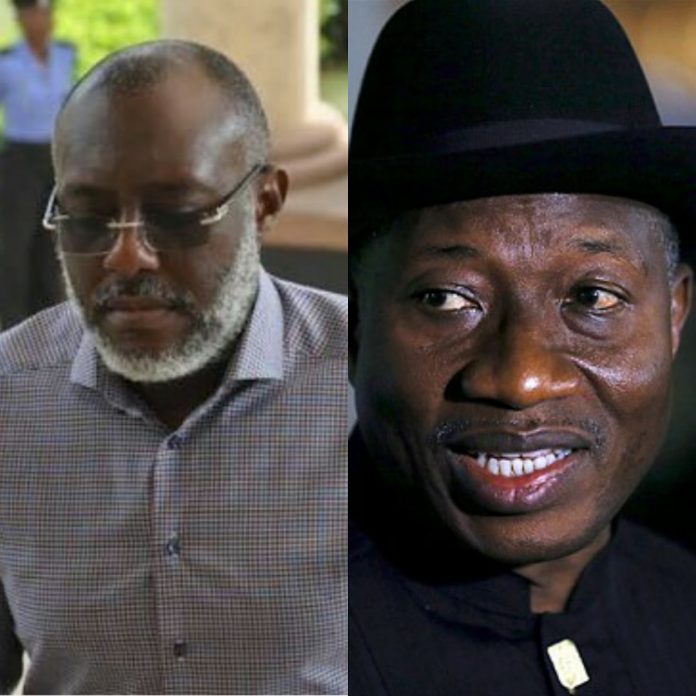 As the legal crackers between PDP former publicity scribe and his witnesses become fiercer, the Abuja division of the federal high court has said it will hear out Sambo Dasuki’s application first before former President Goodluck Jonathan’s.
Metuh has succeeded in praying the court to order the former NSA and Jonathan to appear as his witness in the trial over N400 million money laundering allegation for which the EFCC is prosecuting him.
But Jonathan, who has been evading the court bailiff seeking  to serve him the subpoena, filed an application praying that Metuh should deposit N1 billion for him in allowance before he appears.
Jonathan’s defence counsel is Mike Ozekhome.
Reacting to the various applications, counsel for. Metuh, Emeka Etiaba, said the exercise of his client’s right to fair hearing and defense of himself had been adversely misconstrued by the public.
After taking arguments from the lawyers in previous applications, presiding Justice Okon Abang adjourned to November 1 to entertain further arguments on the fresh motions.
Reacting to Mr. Etiaba’s request for time, Mr. Abang said the law does not mandate a
lawyer to respond to applications in written form.
ALSO SEE: Justice gives Jonathan 5 days to appear on Metuh’s trial
“I have carefully considered arguments canvassed by learned counsel representing the applicant. It is my humble view that the ACJA governs proceedings in the court. It is my view that there is no express law with regards to how respondents should react to written application,’ said Justice Abang
“Listen attentively to what is said in court. If I am too fast you can ask for certified true copy before you will publish what you like”.
Ozekhome , however,  appealed to the court to allow for some time so that he could study the briefs so that he would plan his arguments from the points of law.
Responding to that application,  Abang said it was too late to entertain the request because he could not go back to the records.
Speaking to journalists outside the courtroom, Mr. Ozekhome said the request made by his client had two faces: one was for the court to set side the subpoena or for an order to be made, pursuant section 241 (2) of the Administration of Criminal Justice Act, or for the first defendant to deposit N1 billion as travel and other allowances for Mr. Jonathan.
Reacting to the order made by the court for counsel to submit their reply briefs to the fresh application on Tuesday, Etiaba said the trial of his client had been treated differently from similar trials since it started.
“It is already well past 12 pm and we have been asked to submit replies to two applications, both of which are not less than 40 pages. That is what we are facing. Olisah Metuh’s trial is one of a kind,” said Etiaba.
PV: 0