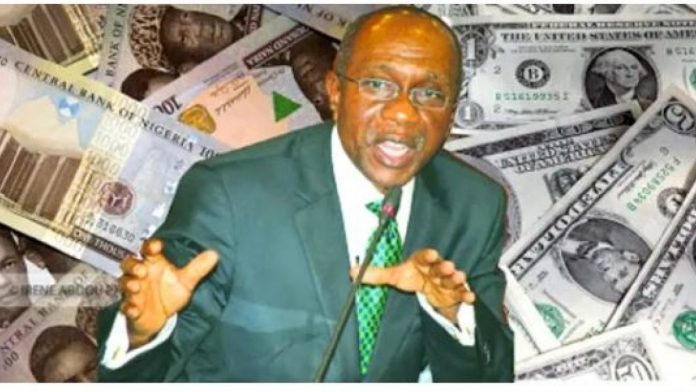 The Naira depreciated against the US dollar on Wednesday, to close at N412.73/$1, while at the parallel market it closed at N574/$1, showing that policy makers at the Central Bank of Nigeria are still confused on how to rescue the local currency.

Governor of the CBN, Godwin Emefiele sometimes ago, perhaps as a distraction left the substance to attack the symptom in his failed effort to control exchange rate, which in recent times has hit rock bottom.

He took the battle to Aboki Fx which he hilariously accused of setting exchange rate for Nigeria by illegally publishing daily naira exchange rate on its website when “CBN Act section 2 empowers only the CBN to decide the value of the naira”.

What is not in doubt however is that like preceding CBN governors and ministers of finance, Emefiele serves not Nigeria but our political and business elite, the greatest threat to stable exchange rate.

However, the problems confronting the Naira didn’t start today. It is a victim of Nigeria’s self-serving political and business elite who, after destroying the budding industries that guaranteed stable foreign exchange rate up to early 80s today create volatility in the foreign exchange market by their struggle for the nation’s scarce foreign exchange they require for personal/business travel, medical needs, and school fees of their children.

Peter Obi, former Governor of Anambra State, who as Atiku Abubakar’s vice presidential candidate in 2019 election told Nigerians his business was “importation of wine” and who back in 2016 commended the new flexible exchange rate claiming “it will encourage exporters of Nigerian products” criticized government for not adequately funding SME that have the potential of becoming multinationals as was the case in China.

He was silent on the fact many of those who secured the SME support diverted the same to importation of finished products leading to the collapse of Sanyo, Adebowale and PZ electronic manufacturing plants.

While Babangida’s commercialization policies that saw the ceding of the control of While Abacha was ferrying our foreign earnings out of CBN vaults with trucks, Anthony Ani, his minister of finance and Paul Ogwuma the CBN governor kept their peace.

READ ALSO: Why e-naira is different, better than other cryptocurrencies – CBN

The 2014 war of attrition between former CBN governor Chukwuma Soludo and Ngozi Okonjo-Iweala, Jonathan’s minister of finance over who contributed more to the destruction of the economy and instability in the foreign exchange market also confirmed their loyalty was to the political and business elite they served rather than Nigeria.

Soludo celebrated his consolidation of banks which according to him led to the repositioning of 14 Nigerian banks among the best 1000 banks in the world within two years. It was however not a surprise that some of the miracle banks including Skye Bank were rescued  according to Ahmed Kuru, AMCON MD, with about N1 trillion collapsed.

Okonjo-Iweala went on to accuse Soludo of spending N5.4 trillion of taxpayers’ money through AMCON to keep some of the mega banks afloat. Soludo did not deny the figure but insisted about 350 Nigerian members of the elite and their businesses were responsible for more than 80% of the N5.4 trillion debt portfolio of AMCON.

In other words, 350 political and business elite saw an amount that was more than 50% of Nigeria’s 2018 budget as their own share of the national cake.

Of course, President Buhari betrayed the nation. Nigerians had expected him to fulfil his promise of refurbishing our four ailing refineries as a response to the setting up of Petroleum Product Marketing Company (PPMC), an instrument PDP deployed to steal N1.7 trillion under the name of fuel subsidy.

But instead, Buhari, outwitted by the political and business elite, has been spending about N1.7 trillion annually on importation of fuel.

Unstable foreign exchange rate is therefore a symptom of the mismanagement of our nation building crisis. And if Buhari misses an historic opportunity to address the politics of the country as counselled by Kwame Nkrumah, someone else will emerge to ensure the nation fulfills her potential.