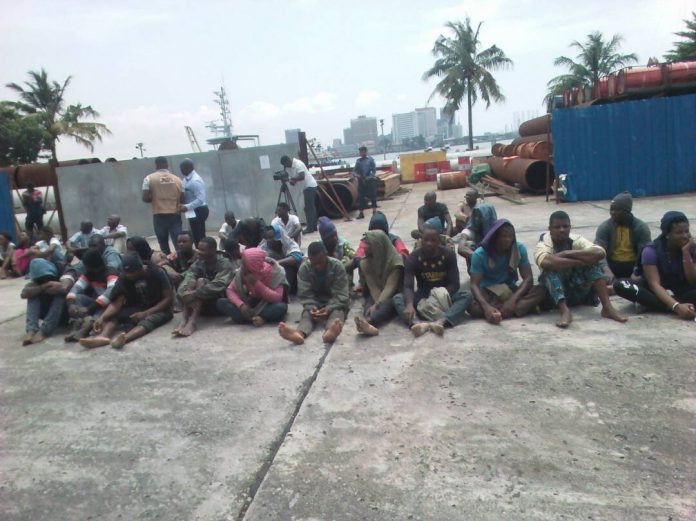 The Nigerian Navy Ship (NNS) BEECROFT in Lagos on Monday handed over 65 arrested persons alongside five boats, two vessels and some cash in foreign currencies to the Economic Financial and Crimes Commission (EFCC) for further investigation and prosecution.

The Commander, NNS BEECRORT, Commodore Maurice Eno disclosed that the vessels and the suspects were arrested at different times and locations.

While briefing journalists at the base in Apapa, Eno who was represented by the Executive Officer, NNS BEECRORT, Capt. Tajudeen Osoba, said, “On July 5 about 5:40pm, NNS BEECRORT patrol team boarded and arrested MV GLENNSTAR within the Lagos Safe Anchorage Area (LSAA) on suspicion of conveying product suspected to be illegally refined petroleum product.

“At the time of the arrest, the vessel had 11 crew members onboard and on interrogation, it was discovered that the vessel was laden with about 800metric tons (MT) of AGO.

“It also claimed to have discharged 200MT at ABO Oil Field located at Escravos Offshore in Warri. However, investigation revealed that the vessel did not pick the product from the right source,” he stated.

Commodore Osoba further reiterated that another arrest was made by naval patrol team on September 9 and six persons were arrested.

“Intelligence report made available to the navy revealed the presence of a wooden boat alongside a vessel conducting illegal transaction in petroleum products without approval.

“Accordingly, a team was dispatched to investigate and effect arrest of the perpetrators.

“Upon approach, the vessel was identified as MT MATRIX, while the boat had six persons and about 140 drums,” he said.

The Executive Officer noted that the six persons were Benin Republic Nationals adding that they had the sum of 3,300 US Dollars suspected to be money for payment of the illegal petroleum products. 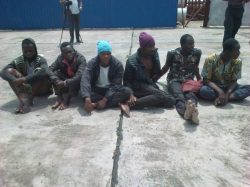 He also said the vessel (MT MATRIX) had 17 crew members consisting of four Pakistanis and 13 Nigerians as well as 10 drums of AGO during the arrest.

“Upon interrogation, it was discovered that the boat had two persons onboard and was laden with petroleum products suspected to be illegally sourced AGO.

“Investigation also revealed that the boat illegally sourced the product within the area and the two persons confessed to have bought the product from an unidentified vessel,” he said.

Oaoba said that the suspects had the sum of N16,680 on them which was believed to be the balance after the illegal transaction.

He also said three other wooden boats were intercepted by the NNS BEECRORT patrol team at LSAA on September 26, adding that the boats had some drums, pumping machine and 21persons onboard.

“Investigation revealed that 20 of the suspects are Benin Republic Nationals while the last one is from Nigeria who coordinates the illegal transaction.

“At the time of the arrest, the suspects collectively had the sum of 21,750 US Dollars, 32,000CFA and N6, 320 on them which were believed to be the money meant for the transaction.

“Additionally, on October 4 about 08:15 am, intelligence report available to NNS BEECRORT revealed the presence of some persons siphoning Petrol Motor Spirit (PMS) from the Nigerian Petroleum Cooperation pipelines laden in front of Glonik Hotel in Lagos,” he said.

Oaoba said that Operation AWATSE was deployed to the scene and eight suspects alongside three tankers were arrested.

While handing over the suspects with the vessels and the boats alongside the cash to the EFCC for further prosecution, Cdre Osoba warned criminals to desist from the waters or face the wrath of the law.

Noting that the Nigerian Navy remains focused and will continue to hunt down the enemies of the nation.