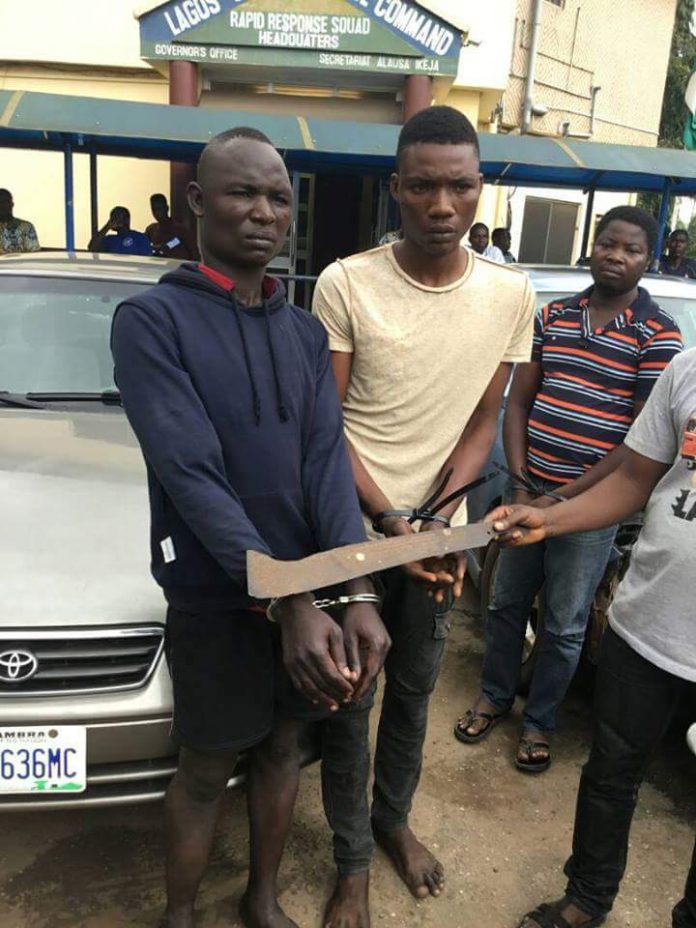 The operatives of Rapid Response Squad of the Lagos State Police Command, have arrested two motorcyclists who specialised in using it to rob people in Ajah and Mushin.

The suspects: Muyideen Adegboye, 25, a furniture maker in Idi-Oro, Mushin, and Idris Farouk, 26, an okada rider in Ikate Area, were arrested at separate incidents on Thursday morning while using motorcycles to rob.

It was learnt that Muyideen Adegboye was arrested about 3a.m. with a stolen keke and two live cartridges while his other gang member escaped leaving behind the motorcycle the gang used for the operation.

On his part, Farouk was arrested at Ikate Roundabout around 4:35 a.m. after his gang member and himself on an okada, armed with a cutlass robbed one Samsudeen Abiola of his phone and money.

According to Adegboye in his statement to the police, “we went to Alasalatu, Mushin to steal tri-cycle. This is the fourth time I would be following my colleague, Seyi, to steal keke.

“We use motor bike to rob very early in the morning and at night. We sell the keke in Idi-Oro, Mushin for N50,000. Seyi is the one that invited me into the business.

“I met him at the ghetto. He is the one that owns the gun that we use during operations. I hold extra live cartridges for him while we operate. Whenever there is need for it, he collects them from me,” he explained.

Farouk admitted been a robber with his accomplice, Wale, who is now at large. He added that they operate around Ikate and Small Kuramo stealing okada.

“We steal motor bike from riders who patronise ‘prostitutes’ on Small Kuramo. We monitor them, as soon as they entered the room for a quick one; we steal the okada and sell them. 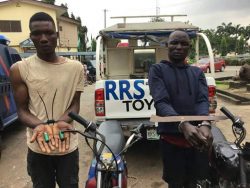 “This was before it was destroyed. My other gang members are Arisika and Abdullaziz. I met them in Ajah and we go on operations together.

“We steal okada and rob at night till dawn with our okada. We have been in the business for more than two years. We sell stolen okada for N60,000 and share the proceeds of the operation among ourselves.”

The arrest of the two suspects has been confirmed by the Police Public Relations Officer, ASP Olarinde Famous-Cole.

He explained that the police are on the heels of other members of the gangs, adding that those arrested have been transferred to FSARS for further investigation.