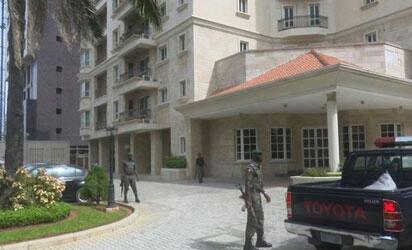 Share this on WhatsApp
Spread the love
A detailed list of owners of the Ikoyi luxury apartment where $50 million was stashed has emerged following  President Muhammadu Buhari’s  order suspending  his SGF David Babachir and the DG of the National Intelligence Agency,  Ayodele Oke over the matter.
Operatives of the Economic and Financial Crimes Commission (EFCC) found close uncovered the cash haul last week.
According to Sahara Reporters, the building, located at 16 Osborne Road in Ikoyi, has nine floors of 19 Apartments and two penthouses.  It is owned by a former Peoples Democratic Party chairman, Ahmed Muazu, who retained for himself the penthouses, 10A and B; as well as Apartments 11A and 11B.
Oke reportedly to the president days after the discovery that the money  was meant for covert operations authorized by former President Goodluck Jonathan during his tenure.
ALSO SEE: Buhari suspends SGF, DG NIA
Oke’s wife, however, was identified the mule used to carry  the money into the apartment in bags was . She is also among the 19 owners of the building.
Other owners include a former bank chief Fola Adeola, who owns Apartment 1A, and former Anambra Governor, Peter Obi and his wife, who own Apartment 1B.
2A – Ahmed Kida
2B – Ahmed Kida but apartment occupied by Esther Ogbue (a recently retired MD of NNPC)3A – Kayode Sonaike3B – Sterling Assets
ALSO SEE: Drama over recovered N13 billion at Ikoyi