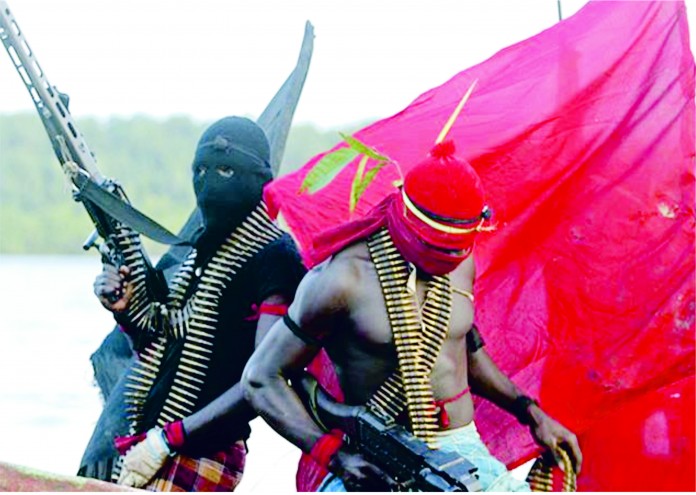 Share this on WhatsApp
Spread the love
The Iduwini Volunteer Force (IDF), a dreaded militant group in the Niger Delta, has written to President Muhammadu Buhari protesting the action of the Governor of the , to liquidate Skye Bank Plc, and surreptitiously hand over same bank to a suspected leader of the All Progressives Congress (APC) from the southwest.
The IDF, in the letter to Buhari signed by Commander Johnson Biboye, demanded immediate removal of the CBN Governor, Godwin Emefiele for what they considered as his anti-people economic policies.
“Mr. President, as a father of the nation, we are forced to draw your attention to the CBN Governor’s plan to blackmail and hand twist the leadership of Skye Bank Plc, by Monday 4th July, 2016, under the pretense of carrying out regulatory action, that is intended to criminally takeover the bank and handover to some influential Nigerians who are certainly enemies of your government,” IDF declared.
The group contended that the question to be asked is, “if the same CBN in its letter dated January 22, 2016, granted Skye Bank plc till December 31, 2016, to wind down its insider related loan and bring it within regulatory maximum. What suddenly happened six months after, for the same CBN to be calling for the heads of the leadership of Skye Bank with five clear months before the expiration of its letter, with the intent to forcefully take over the bank? Is this not curious?”
ALSO SEE: Renewed tension in Niger Delta: Militants threaten fresh attacks
Accordingly, the group stated: “We the leadership of the above named freedom fighting group in the Niger Delta, who have sincerely followed your pragmatic approach to addressing serious national issues, be it political, economic, infrastructure development and above all your desire to ensure things are done with strict due process, are worried about the anti-people economic policies of the Central Bank Governor, Godwin Emefiele.”
The IDF decried that recent economic policies being released by Emefiele are not only anti-people, anti-economic development but also anti-progressive. “It is very important to let you know of the ongoing harassment/intimidation of Chairmen of banks, including their Managing Directors and Chief Executives. This, Your Excellency, should be aware, is a well orchestrated plot by enemies of your government to use the CBN Governor, Godwin Emefiele, to systematically collapse the nation’s economy, so that global watchers could make mockery of your government and finally turn Nigeria to a laughing stock locally and internationally,” Biboye declared.
The group agitated that Nigeria’s worsening economic crisis is to further hit the rocks as the CBN makes good its intention to close down the Sky Bank and 11 banks this Monday.
This, the group said, is already causing anxiety among top bank executives as the Central Bank’s sudden and unexpected decision is seen as ill timed, curious and not too tidy for the revival of the economy which has been nose-diving in recent past.
The IDF reiterated that the CBN, in its letter dated January 22, 2016, signed by Mr. Benjamin A. Fakunle, on behalf of the Director of Banking supervision, stated inter alia: “we refer to your letter dated December 10, 2015, and our exchange of correspondence on the above subject and write to inform you that the Central Bank of Nigeria has granted an extension of time till December 31, 2016, to enable your bring you insider related credits within the stipulated regulatory maximum of 10 per cent of your paid–up capital per director, including his/her related parties and 60 per cent capital for total related credits in line with our circular BSD/9/2004, on large exposures and connected lending.”
It stated that, however, the sudden decision of the CBN to close down the bank is seen as being suspicious. “The CBN Governor has finalized plans to sack the bank’s management and handover the bank to some investors,” the group complained.
The banking industry watchers and financial experts who have been monitoring events are of the belief that if the Federal Government does not call the Central Bank Governor to order, such steps could further plunge the country into monumental catastrophe, IDF said.
Biboye highlighted that before now, it was learnt that the management of the bank had already secured the 40 per cent buying of Sky Bank by a Moroccan financial institution, while funding commitments by the end of September, were said to have been made by major shareholders.
“It was learnt that the CBN’s action may have been as a result of external forces outside the financial system who had been pushing the apex bank to do whatever it needed to do to hand over the bank to them,” IDF maintained.
The group threatened to formally respond to the action of the CBN governor, which an insider revealed, destroys the business interests of prominent leaders in the Niger Delta; warning that they will no longer tolerate such actions as was taken against Ocean Bank owned by the Ibru family which was acquired by Southwest business interests.
“It is in our national interest to allow commercial banks maintain financial equilibrium through their management boards and internally generated transition processes that can engender confidence as the entire act of banking in a normal society; this must be built on trust and confidence,” IDF declare.
The Insider informant stated that the IDF will soon make the next course of action known to the public if their demand is not considered by the President.
Share this on WhatsApp