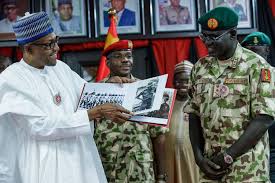 Chief Sam Eke, the National Chairman of the Green Party of Nigeria (GPN) and the Presidential candidate of the party, has slammed the Professor Yakubu Mahmood-led Independent National Electoral Commission (INEC) over the declaration of the All Progressives Congress Presidential candidate and the incumbent, President Muhammadu Buhari, as the winner of the Nigeria’s 2019 presidential election.

ND had reported that the Independent National Electoral Commission (INEC), on Wednesday morning formally declared the Presidential candidate of the All Progressives Congress, APC, President Muhammadu Buhari as the winner of the February 23 presidential poll in Nigeria.

Buhari polled 15,191,847 votes, compared to the 11,262,978 votes by Atiku Abubakar, the Presidential candidate of the Peoples Democratic Party(PDP).

But, speaking with newsmen on Wednesday, in Umuahia, the Abia State capital, Eke rejected the presidential results as announced by INEC.

He asserted that the leadership of the Green Party of Nigeria (GPN), viewed the just concluded presidential poll as monumental fraud, which does not reflect the wishes of Nigerian people.

The Presidential candidate, said, “it is unacceptable to us if this is the way election is being conducted. We are not yet in democracy, we are still in the military regime. And it is very unfortunate that the person of Professor Yakubu Mahmood will be the person to be used to do this kind of job”.

He said,”I am not satisfied with the outcome of the presidential election. This is a monumental fraud. The election is a sham. And as far as I’m concerned, that is not election. It is unacceptable to the Green Party of Nigeria(GPN) speaking as their presidential candidate and National chairman.

” The irregularity is of the highest order, that it has now made everything worsen for this country. Because, the average citizens of Nigeria that suppose to take the presidency back cannot do that, because, there is no credibility in the process.

“And you can see it, it is even written in all over the places and on the face of the INEC chairman and even those that rigged themselves into power. This is the worst election ever conducted in the history of this country,” Eke added.