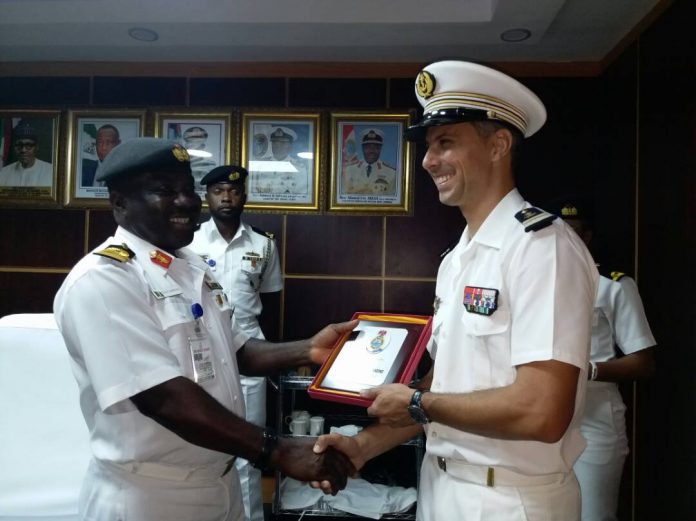 Share this on WhatsApp
Spread the love
By OKOSUN DENNIS
The Flag Officer Commanding (FOC), Western Naval Commanding (FOC) said Nigerian Navy
would collaborate with the French navy in tackling maritime insecurity in the Gulf of Guinea.
The FOC, Rear Admiral Sylvanus Abbah spoke on Wednesday while receiving a team of the  French Navy Ship (FNS) Germina at the command in Apapa, Lagos.
The FNS Germina sailed into harbour at 9 a.m into the Naval Dockyard Limited in Victoria Island, Lagos to further foster existing bilateral relationships and  tackle maritime insecurity in the Gulf of Guinea.
Admiral Abbah disclosed that the Gulf of Guinea was becoming a hotspot and every part of the world is interested.
“The French presence is not the only one, we have other countries that is operating with us and that is why if there is any attack or act if piracy, we are always notified on time.
“If you check closely from your record for the past one year, act of piracy generally in our Lagos area has reduced greatly,” he said.
Abbah said that cooperation between the two navies was what mattered, adding that it was the second port call the French was making to Nigeria since 2001.
The Commanding Officer of the ship, Commander Daetan Gayraud, who led the French naval team, told journalists that the visit was aimed at strengthening cooperation between the navies of both 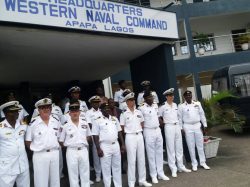 countries.
He said the entire 100 crew members were very delighted to make this port call to Nigeria.
“I hope the existing cooperation between the two navies will continue to go on and we are very delighted to be received by the FOC.
“It is an operation that began in 1990 to be able to cooperate with African navies. We will be in Nigeria for two days and would after, proceed to Gabon to cooperate with their navies.
“After Gabon, we would have an exercise at the end of November with other navies and the Nigerian Navy will also participate,” he reiterated.
Share this on WhatsApp