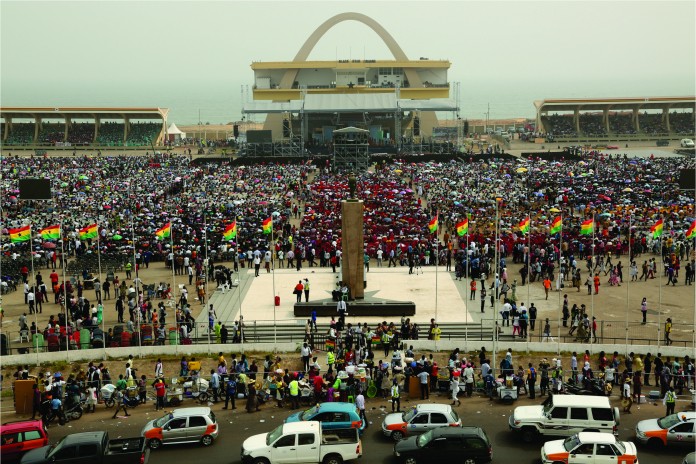 Satanic tactics and diverse strategies employed to keep Christians down and powerless were at the weekend exposed during the Night of Bliss with the Pastor Chris in Accra Ghana, as several thousands of congregants received divers miracles from God.

The nation of Ghana also received special destiny-changing pronouncements of blessings from the Man of God Rev. (Dr.) Chris Oyakhilome, who was making his first-ever visit to the west African country.

The event which was held at the Black Star Square (formerly Independence Square) which saw adjoining spaces such as the Ohene-Djan Sports Stadium, Accra, and the Parliament House Grounds all packed full with thousands of people. Ghanaians described the turn out at the Night of Bliss Accra as unprecedented, as it is the single largest gathering in the country’s history.

Speaking to the audience, Pastor Chris as he is fondly called, stated: “The devil knows that you know the Word of God and he knows he is not strong but because of your negative confession, he finds a way to get you, using deception.” He went on and exposed Satan’s tactics of deception and fear, revealing his vulnerability and weakness.

Quoting copiously from the Bible he spent time as he shared God’s Word with the crowd to dispel their fears or considerations for Satan in their lives. “Faith is expressed in words and actions,” Pastor Chris says, on the subject of retaining a miracle. Satan by himself knows he is not strong, so, have no fear of the devil.” Adding that “a Christian doesn’t need deliverance from the devil, if you will learn the word of God, you will realise you don’t need deliverance.”

Pastor Chris at the Night of Bliss Ghana

It doesn’t matter how many demons gang up against you, you cannot be defeated, Pastor Chris told the mammoth crowd which gathered To further buttress the message, the Man of God asked: “for instance, how many rats can be enough to agree to come together and attack a cat? It’s not in them. So be not perturbed; it is not in the demons to be smart enough to attack you (the Christians).

Continuing with an unequalled audacity of faith in His God, Pastor Chris charged the attendees saying: “Satan has nothing in you. I have no fear in me. Declare it – Christ Jesus is greater than all. Fear is of the devil and Faith is of God.”

With every word spoken by the BLW President at the Night of Bliss 2016, believers present were strengthened in the grace of the Lord Jesus Christ and emboldened to live the fearless and glorious life to which they were called.

As the Christians had their faith stirred for an effective life in Christ, unbelievers had their eyes open to see the solution to all of their struggles. “If you have the knowledge of God’s Word, it would be different,” Pastor said, urging the massive crowd that true liberty can only come through revelation into God’s Word.

The Night of Bliss Accra with Pastor Chris was indeed a life changing, destiny transforming encounter with the miraculous for all who attended and the nation of Ghana. Just like others, these special meetings are characterised by the miracles of salvation, healing, deliverance and special blessing for all in attendance.

Addressing the mammoth crowd the man of God, Rev. (Dr.) Chris Oyakhilome, clarified the difference between being in a covenant with God and being children of the covenant.

The man of God explained that the believer is an heir of the covenant, which entitles him or her to certain blessings, for which they need not pray. “Prayer is not for getting things from God…it is our wonderful, highly exalted communication with our Heavenly Father, in this glorious fellowship,” he said.

“We have a mandate from Heaven, and we fear no man,” dispelling fear from hearts, he said. “Christ Jesus is greater than all; have no fear,” he added, enlightening everyone on the weakness of all sources of fear in the presence of the Master Jesus and His Word.

An integral aspect of the event was the massive expression of creative gifts and talents in ministering God’s Word, joy and peace into the hearts of people from various works of life.

Superbly choreographed numbers, inspiring contemporary dances and other performances had everyone on their feet, giving vent to blissful sounds and steps. The message of each ministration was ingrained in every attendee, causing an irreversible metamorphosis.

The congregants expressed so much liberty as they worshipped and danced, led by the Ghana Mass Choir which is glamorously dressed and expressing contagious joy and the Loveworld All Stars.

Indeed, no event in this nation, “pre-colonial, colonial or post-colonial” has been of this magnitude, said a senior military officer who witnessed the event.

As the event drew closer the atmosphere in the nation of Ghana became charged with expectations of the miraculous by the citizens who were eager for the Programme to commence.

Expressing his expectations for the glorious meeting with Pastor Chris, a member of Christ Embassy Accra Ghana Zone said: “From the north to the south, from the east to the west, the Word of God will Spread, our economy will be healed, the sick will receive their healing and we know so much promotion will come to the land of Ghana.”

“I will be the first person on the ground because I have heard so much about Pastor Chris,” says taxi driver Dominic Appiah, excited about the man of God’s coming to Ghana.

“I’m excited about this program and that our lives will never be the same again; our country will never be the same again and there will be tremendous changes in our country, People will receive a lot of miracles in the Name of Our Lord Jesus Christ, I’ve never seen the Man of God perform miracles physically  but this time, i will be there in the program and I will see them physically,” said Emmanuel Ibuaka,

BLW CEC Member, Pastor T.T. Edun, addressing the crowd along with a group of panelists, said: “The days of fasting have elapsed, because we are now here at the Night of Bliss; now that we are here, what do we do to receive?”

With these words, he stirred up a hunger in the attendees in anticipation of the miraculous power of God in operation through the ministry of Pastor Chris.

Pastor Chris: A life worth celebrating

An inspiring charge from the Director of Church Ministry and Organization and Member of the BLW Central Executive Council (CEC), Reverend Tom Amenkhienan, in the moments preceding the arrival of the Man of God on the stage climaxed the expectations of the crowd by putting  in perspective the blessedness of Ghana and the privilege to receive the Prophet of God, Pastor Chris Oyakhilome, at this time.

The visibly ecstatic Rev Tom declared: “Blessed is the nation that receives the man that God has sent.”

“The people of Ghana are a special people, but after tonight, you would become more special,” he said, giving further credence to God’s eternal purpose for the nation through such an epochal event in her history. When they came in the morning, the dry rod had blossomed and it had branches; it had fruits and it had flowers.

But God knows the next level of your life and tonight the Holy Ghost will get a hold of you and catapult you to that level and you will never be the same again,” Rev Tom concluded.

Thousands gather the night before

The hunger for God’s Word and his presence was evident in the nation of Ghana as thousands of worshippers began to arrive the Black Star Square  (formerly Independence Square) venue of the much-awaited Night of Bliss Accra with Pastor Chris 24 hours before the commencement of the epochal event.

It was observed that the main venue was almost filled to capacity by 10am for the meeting that is billed to commence today Friday February 5, 2016 by 6pm till dawn.

It was gathered that attendees started arriving as early as 6pm on Thursday, February 4, 2016 for the programme.

According to eyewitnesses every effort to convince the early birds to go and return on Friday were not acceptable to the very expectant crowd who said they had travelled long distances sit at vantage positions for the meeting with Pastor Chris.

Their arrival several hours before the Programme’s scheduled start did not dampen the strength and excitement of the congregants that gathered at the Black Star Square and other viewing centres for the Night of Bliss Ghana 2016 with Pastor Chris.

By 2pm the venue was declared by security agencies to be fully packed as every available space had been occupied, and the Accra Stadium was immediately opened for the crowd that kept increasing in their numbers.

The miracles were countless as thousands stood in the queue waiting to testify of their healing miracles after the Man of God prayed for all in attendance for a miracle from God, whatever their needs were.

Many testified of healing from blindness, lameness, deafness, dumbness, stroke among others.

Wheelchairs,crutches,other walking aid, hearing aid, oxygen tanks among others were abandoned by the many people who received healing miracles.

Earlier on, while the people sat waiting for the meeting to commence many started to receive miracles.

Referencing Psalm 85:9—12, Pastor Chris  called on the Accra Zonal pastor of Christ Embassy Pastor Biodun Lawal to read the scriptures to the hearing of all of Ghana. He declared: “Surely His salvation is nigh them that fear Him; that glory may dwell in our land. Mercy and truth are met together; righteousness and peace have kissed each other. Truth shall spring out of the earth; and righteousness shall look down from heaven. Yea, the Lord shall give that which is good; and our land shall yield her increase”.

The man of God reiterated these words and he prayed saying that “Ghana is a blessed nation. You must keep what you have, celebrate what you’ve got.” He further described Ghana as very special country in Africa.