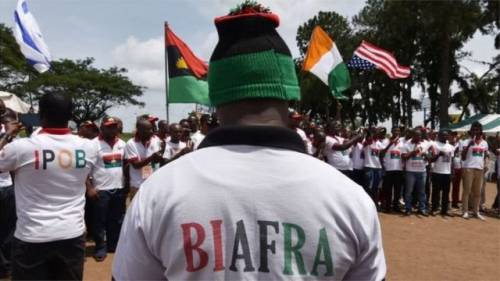 The Biafra Nations League (BNL), a factional separatist group operating in the Bakassi Peninsula, has revealed its total control of the Gulf of Guinea, an entrance maritime route into the coasts of Nigeria and Cameroon from the Atlantic Ocean. The BNL National Leader, Princewill Chimezie Richard, had in a statement, reiterated the ban on vessels entering into Nigeria and Cameroon through the Bakassi Peninsula by the group. He cautioned that the BNL will not spare any ship found disobeying the group’s ban on vessels sailing into Nigeria or Cameroon through the Peninsula coastline.

Princewill Chimezie Richard threatened that BNL would do everything to ensure Cameroon does not have sovereignty over the Gulf of Guinea.

Princewill Chimezie Richard revealed that BNL operatives are already becoming impatient, boiling for war and could engage in activities that would plunge the country into apprehension if the Biafra nation is undermined.

The BNL leader berated President Muhammadu Buhari and Cameroon President, Paul Biya, for their utterances, accusing both presidents,  Buhari and Biya, of instigating war against the separatist groups operating in the coastal borders and the Gulf of Guinea as contained in the Maroua Agreement between Yakubu Gowon and Ahmodou Ahidjo. Princewill Chimezie Richards was of the view that Cameroon is afraid of losing control over Bakassi as a result of the Biafra struggle for independence, noting that this might lead to acts of terrorism in the Bakassi Peninsula.

“They want to renew their alliance under the Maroua Agreement, they want to gang up against us, but this time they have failed.

“Our members and supporters in Bakassi and other areas of BNL influence are getting angry; those in Bakassi are already making moves to return to the creeks and show this government pepper. “They are playing with fire, they should be ready to arrest all of us because nothing has changed since the arrest of Kanu,” the BNL National Leader had declared.

Princewill Chimezie Richards cautioned President Paul Biya of Cameroon that “unlike the IPOB, BNL is directly involved in the fight against Cameroon due to their presence in the oil rich Peninsula.”