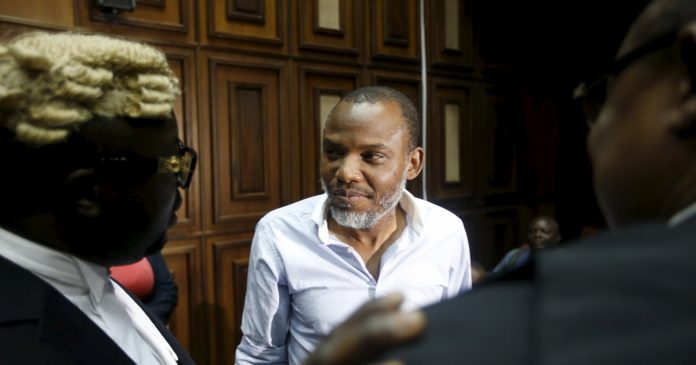 Detained leader of the Indigenous Peoples of Biafra (IPOB), Nnamdi Kanu, has expressed anger over the killings in the South-East and warned perpetrators to desist from the evil.

Emmanuel, younger brother of Kanu disclosed this after he visited his brother on Monday in the Department of State Services (DSS) facility where he is detained.

Although IPOB has denied culpability for the spate of attacks and killings in the geopolitical zone, security agencies have said the separatist group is responsible.

In recent weeks, the attacks have worsened in Anambra state, where a lawmaker, Okechukwu Okoye, was killed and beheaded by gunmen.

He said Kanu is angry over the killings in the south-east.

“Just finished seeing Mazi Nnamdi Kanu at the department of state security services Abuja,” he wrote on his Facebook page.

“He expressed his anger over the killings in Biafra land and warned whoever is responsible to stop this evil.”

The younger Kanu said the IPOB leader also called for the release of Ukamaka Ejezie, popularly known as Mama Biafra, from detention.

“During our interactions, he told me he saw and spoke with Mrs Ukamaka Ejezie aka (Mama Biafra), who is currently being detained in the same facility with him,” he wrote.

“The world should note that after the death of his parents, Mrs. Ukamaka Ejezie has played the role of [our] late mother Ugoeze Sally Meme Kanu in his life. He insisted that Mrs Ukamaka Ejezie has done nothing wrong to anyone and must be released.”

At the resumption of his trial on May 18, a motion for bail was denied by Binta Nyako, the presiding judge, who said: “The application is premature and refused with liberty to refile and reapply.