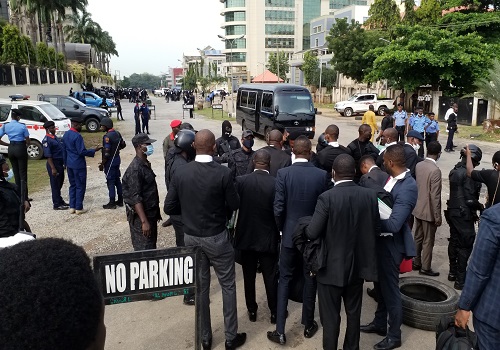 There were intense arguments between the family of embattled leader of the Indigenous People of Biafra (IPOB) Nnamdi Kanu, journalists and security operatives as they were denied access into the courtroom as Kanu’s trial resumed today.

Many journalists were also denied entry into the courtroom, except those names appear on a list produced by the DSS.

Gathered outside were frustrated family members, supporters, civil rights groups, lawyers, journalists and other members of the public, who were not allowed near the court.

A member of a civil society organisation, Deji Adeyanju, said: “At least even under military rule journalists would be given access to the courts.

“Members of the general public could also access the court. But today the reverse is the case. It is most unfortunate and unbelievable that this is supposed to be a democracy.

“Basically Nigerians should know that the President Muhammad Buhari regime has suspended the Constitution and we are practicing military rule in the country.”

Although Kanu’s visuals could not be obtained, he was however believed to be among a convoy of about six vehicles that drove into the court premises around 8am on Thursday morning by operatives of the Department of State Service (DSS).

Before his arrival, security operatives including DSS, Nigerian Army, Police and the NSCDC had cordoned off all entrances leading to the headquarters of the Federal High Court, Abuja.

Even staff of the Federal High Court had to alight from their staff bus to be screened before they were allowed to go in.

Kanu was arraigned alongside four others on six count criminal trial charge bordering on alleged terrorism and treasonable felony in 2016.

He pleaded not guilty to the charges and was admitted to bail in the sum of N100 million with three sureties in like sum, one of which was a serving Senator, Enyinnaya Abaribe.

However, he had jumped his bail in 2017 after his family house in Afarukwu, Abia State was invaded by personnel of the Nigerian Army.

Following the jumping of his bail, trial judge, Justice Binta Nyako had voided the bail and issued a warrant for his arrest.

After nearly four years of being a fugitive, he was re-arrested by security agents in collaboration with Interpol and brought to Nigeria in late June to face his trial.

At the proceedings in July, his trial could not go on because of the failure of the DSS to produce him in court.