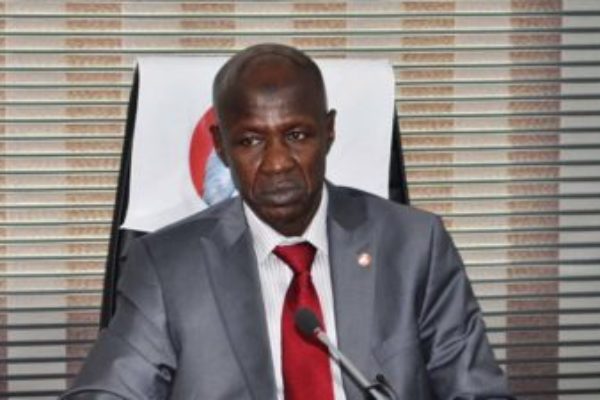 The Presidential Investigative Panel interrogating the former acting chairman of the Economic and Financial Crimes commission (EFCC), Ibrahim Magu, has been receiving clues to alleged deeper illegal financial  transactions carried out by a collective of individuals within and outside the Commission in collaboration with the embattled EFCC former acting chairman. The emerging allegations beside the lingering N39 billion are exposing a seeming fraud cartel in handling several cases, most of which are elongated, forgotten inconclusive or lost by EFCC. These activities leading to these manifestations, which were alleged to involve settlements and bribery, were said to be carried out by fronts and intermediaries who constitute fraud cartel and allegedly report to Magu.

Senator Shehu Sani who represented Kaduna Central on the National Assembly, also stated that the former EFCC acting Chairman, Ibrahim Magu, was running a cult in the commission.

Sani added that selected EFCC officers known as “Magu boys” or Chairman squad” operated the anti-graft agency with much impunity.

Senator Sani, in a post on his official Facebook page, maintained that the” vicious and cruel” officers reported directly only to Magu.

“Contrary to the facade you see from the Outside, the EFCC has been run by an inside cult called “the Magu Boys” or “the Chairman Squad.’

“They are a select cream of vicious and cruel officers who operate exclusively and with impunity and only report directly to their boss.

“The inside cult is the dark and immoral aspect of the agency engaged in persecution, blackmail, frame-ups and cruelty. The cult has been the wheel behind the ordeal of their embattled Boss. Until they are rooted out from the agency also.

“I believe a lot of revelations will be coming out from other marginalized and honest officers in the so-called anti-corruption agency,” Sanu declared.

Moreover, several stakeholders in the Nigerian polity have raised red alert that Magu was not alone in the alleged multiple illegal financial deals upon which he is being  investigated by the Presidential panel and, unfortunately, leading to his being fired by President Muhammadu Buhari as EFCC boss.

Like Senator Sani, the stakeholders reiterated that the embattled former EFCC boss purportedly operate “Magu Car Wash” which they described as “Magu’s house of thieves,” being translated to imply the “Magu boys”. They cried out that “Magu did not act alone;” demanding that the ‘fraud cartel’ must be dismantled, including the structuring of EFCC.

The cartel  was said to constitute mid-level officers promoted to head different task forces. Ahmad Ghali and others were said to be created to purportedly frame up and extort suspects. They allegedly report directly to Assistant Commissioner Ilyasu Kwarbai, head of operations in Lagos. Ilyasu Kwarbai was said to be linked to the murder of a suspect in detention who attempted to resist exploitation and “refusing to cooperate”.

Blackmail was identified as a major tool of Kwarbai to demand a share of the loot for which a suspect is facing investigation over allegation of fraud. Funds in millions of naira, huge property, were alleged to be acquired through this process during investigations. He was alleged to have made fortunes in the controversial 2015-2017 investigations of Oil deals, the $2.5 billion Security votes investigation of oil barons, Security chiefs, several bankers, and private businessmen,

There was also allegation of cutting off a percentage from recoveries from EFCC records on a stolen warehouse secretly kept by agents in Lagos in the pretense of investigation.
A businessman in Lagos and Polo player, Francis Ogboru, was alleged to be an EFCC agent who witch-hunts people to make money, fronting for the commission. It was alleged that suspects were compelled to dole out funds in billions, cede property to Ogboru, who subsequently negotiate and secure protection for the ‘client’ against prosecution and, thereafter, closes the case.

Ogboru was alleged to be so wealthy, attending high profile ceremonies in Lagos without known licit source of income or business. He was said to be a major shareholder in Dana Airlines.

The alleged operations of Ogboru was said to be well-known to the EFCC hierarchy with full awareness of the purported “Magu car wash”.

It was alleged that suspects are directed at advanced stage  of investigations  to liaise with Ogboru while on bail at his Victoria Island, Lagos Office, to negotiate soft landing.
The protesting stakeholders, therefore, demanded that “to know where the loot is hidden, they urge the fearless Justice Salami and other Members of the panel to widen the net and scope of Magus investigation, to investigate Kwarbai, Ghali, Ewela, Bashir, Ogboru et al and re-discover the definition of laundering of Public Assets.”

They further demanded that “The Panel should invite public and private Memoranda from victims of Magu/Kwarbai extortion, framing and defamation and stealing.” They remarked that the panel will be shocked with disclosures on the activities of the Magu boys and their criminality.

The stakeholders revealed that when whistleblowers became loud in 2017, Magu allegedly quickly disbanded the task force, redeployed Kwarbai to Police Headquarters, including other members to  various police divisions, and re-created another team of loyalists to continue the car wash scheme.

It was further demanded that “the Presidential panel  should have the latitude  to unearth the truth and recover several billions from Magu/Kwarbai, including the agents that have been storing millions of Dollars and Naira from the EFCC systematic off-balance sheet, bleeding and  re-looting recovered funds.”

The stakeholders plaguing the role of whistleblowers alleged Ogboru, who they described as EFCC un-official Treasurer, and his cohorts, are still in service for the cartel. They further said that “the amount of recoveries under reported by the commission is mind boggling,” adding that, “it can fund monthly federal budget.”

They, therefore, advocated that “it is time to unearth, recover and recommend sweeping reforms to restructure the EFCC to attract productive talents, diversity  and elevate the commission’s corporate governance and oversight framework to serve Nigeria better. They insisted that all co-conspirators and disgraced operatives now hiding from the ‘car wash scheme’ but helped Magu to abuse office, should be exposed and be made to face the law.”

It is gradually being revealed that Magu’s ordeal sprang from internal forces in EFCC, perhaps, those schemed out of the cartel.

The Presidential Investigative Panel has indicated closing in on the alleged fraud cartel.

Share this on WhatsApp
Related Topics:Economic and Financial Crimes Commission (EFCC)Ibrahim Magu
Up Next