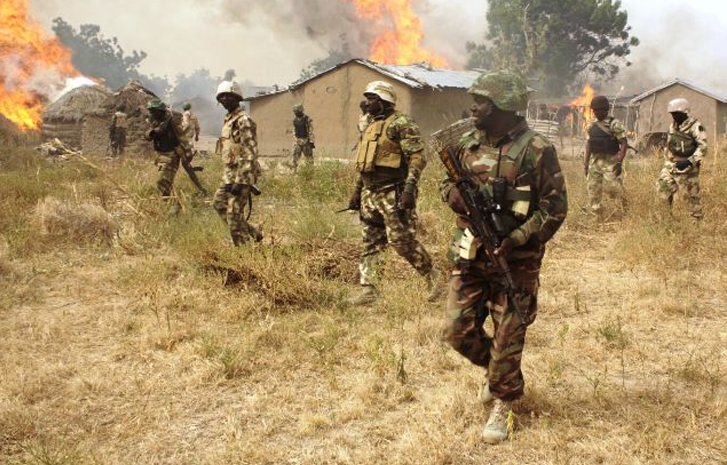 Barely four days after President Muhammadu Buhari assured Nigerians of his administration’s determination to consolidate gains recorded in security, troops of the Nigerian Army have neutralised scores of bandits, including Ibrahim Kachalla Gudau.

Gudau, a notorious and one of the most dangerous bandit leaders, commanded a group carrying out kidnappings and killings in Kafuna, Katsina, Zamfara and part of Niger Republic.

Gudau’s gang was believed to have killed the seven personnel of the Nigeria Security and Civil Defence Corps (NSCDC), who were ambushed and killed by bandits in Kaduna State while on official duty, last week.

According to available intelligence, Gudau, whose corpse had gone viral in the social media, was one of those killed by the troops as they repelled an attack in Kankami village in Kaduna State.

National Daily reports that Buhari had in the course of the week, pledged that the gains recorded in security would be further consolidated and more attention would be given to the economy, before handing over on May 29.

The president stated this when he received the Executive members of the Catholic Bishops’ Conference of Nigeria (CBCN) at the State House, Abuja, on Wednesday.

Buhari said that the security situation had improved over the years, particularly in the North East where the focus had shifted to rebuilding infrastructure and re-orientation on education.

President Buhari had earlier visited Yola, Adamawa State, where he called on voters to shun sentiments and make history by electing the first female Governor in the country in 2023, Sen. Aisha Ahmed-Binani.

According to him, her track record of dedication to duty and service will improve the livelihood of citizens.

Buhari gave the challenge at inauguration of the All Progressives Congress (APC) presidential and governorship campaign in Adamawa on Monday.

The president told voters that Binani had consistently worked for the welfare of the State and indigenes over many years, and entrusting her with the Office of the Governor would further strengthen her to reposition the State for greatness.

According to him,the election of Sen. Aisha Binani as the next governor of Adamawa will open opportunities for women in the country and send a signal to the world on Nigeria’s leadership maturity.

On the same day, President Buhari moved to Damaturu, Yobe, where he inaugurated some projects and also attended State Banquet organised in his honour.

While in Damaturu, Yobe capital, Buhari urged Nigerians to develop strong confidence in the country, its security institutions and never allow any terrorist group to destablise Nigeria again.

According to the president, the Federal Government will continue to protect the right of every Nigerian child to education, particularly the children displaced from their homes by Boko Haram.

At the State Banquet, Buhari restated his vow to serve God and Nigeria until his last day in office and beyond.

According to the president, nobody can blackmail him on inexplicable wealth and illicit enrichment while in office, saying ‘‘I do not have one square-inch outside Nigeria.’’

He advised Nigerians to remain patriotic, saying ‘‘as I said more than 30 years ago, we have no other country than Nigeria, we must all stay here and salvage it together.’’

Buhari said that the most critical security challenge inherited by the administration nearly eight years ago was the potent and pervasive threat of terrorism.

He, however, expressed delight that normalcy had returned to affected States in Northeast Nigeria.

At the rally, the president urged eligible voters in Yobe and the northeastern part of the country to ensure that his party’s presidential candidate, Bola Ahmed Tinubu was elected in the 2023 general election.

The president said a vote for Tinubu and his running mate, Kashim Shettima, would guarantee the sustenance of progress made in the security, economy and education sectors of the country.

According to him, following the victory against terrorists in the region, the APC-led government is more than ever before energised to defeat whoever threatens the unity of Nigeria.

Also on Jan. 10, President Buhari approved the appointment of Obadiah Nkom as Director General of the Nigeria Mining Cadastre Office for a second and final term of four years .

Nkom was first appointed on Jan. 12, 2019 for an initial period of four years.

The president hosted a delegation of the Universal Peace Federation Africa, saying from his experiences both as military head of state and as civilian president, multi-party democracy is the best system of government.

Buhari said he wondered why some African countries were still descending into the abyss of unconstitutional change of government, saying: “I thought we had finally put that behind us.’’

At the event, Buhari affirmed that Nigeria was working closely with ECOWAS to deal with insecurity in the West African region as well as implementing strategies to contain the spate of unconstitutional changes in government.

He called for cooperation and collaboration from the countries to overcome challenges in West Africa.

The president on Jan. 12 expressed his anguish over the death of seven personnel of the Nigeria Security and Civil Defence Corps (NSCDC), who were ambushed and killed by bandits in Kaduna State while on official duty.

He described the loss of the NSCDC personnel as a tragic event and saluted the courage of the men who gave their lives to the nation.

The president also addressed the Global South Virtual Summit, where he urged leaders of the Global South to agree on a common agenda on ways to reduce the increasing burden of debt and inflation on that region of the world.

The Nigerian leader expressed optimism that the meeting, hosted by India, in its capacity as the voice of the South, will address issues of climate change, food security and access to energy.

President Buhari on Friday promised to consider the requests for assistance made by Gov. Ademola Adeleke of Osun, who was at State House on a ‘thank you’ visit.​

The governor, elected on platform of the People’s Democratic Party (PDP), said he had come to appreciate the President for providing a level playing field in the election that held in July last year.​

The governor believed that free and fair elections would be one of the greatest legacies President Buhari would bequeath to the country, as the development was already being applauded home and abroad.

The governor, who spoke to State House correspondents after the closed door meeting with the president, said he was on a ”thank you” to the villa.

President Buhari had on Dec. 29, 2022, visited Kogi where he inaugurated some legacy projects.

Bello, who spoke to newsmen at the end of his meeting with the president, boasted that with 21 governors backing the Presidential flag bearer at the APC, Bola Tinubu, the APC candidate would emerge victorious in the Feb. 25 elections by a landslide.

The governor described Tinubu as one that had touched lives of Nigerians across the board, adding that those campaigning against him were only making him popular.

President Buhari attended wedding fatiha of the daughter of his late Chief of Staff, Mallam Abba Kyari at the National Mosque in Abuja, on Friday.

The wedding which took place at the National Mosque, had in attendance dignitaries including some state governors, National Assembly members and heads of security agencies, among others.

Kyari, died on April 17, 2020 of complications from coronavirus at the First Cardiology Consultants, Ikoyi in Lagos State.