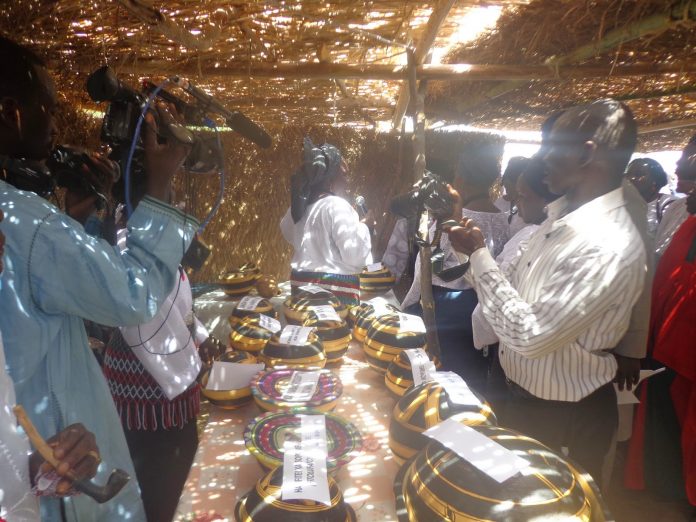 Mr Stephen Irmiya, the Paramount traditional Ruler of Bachama in Adamawa said the frequent clashes between farmers and herders in the area had no religious or ethnic coloration.

Irmiya made the observation when he received the Presidential delegation on quick intervention at his Palace in Numan.

The delegation was led by the Director, Search and Rescue, National Emergency Management Agency (NEMA), Air Commodore Akube Iyamu, who was accompanied by other top officers of the agency at both the national and state levels.

The Monarch said the frequent conflicts between farmers and herders had affected both sides.

“The frequent farmers and herders crisis in this area has no any religion or ethnic coloration as some e emy of peace are speculating.

“Because both the two sides had being affected, even our Fulanis who we are living together for long time are also affected by the common enemies of peace

“Government should wake up and stop the spate of unnecessary killings,” Irmiya said.

He observed that several government emissaries and delegations had visited the affected communities and made promises but not much had been done.

Speaking earlier, Iyamu said that the delegation was in the area in furtherance of the directive of President Muhammadu Buhari.

Iyamu explained that the delegation was in the area to assess the level of damage done and to consider areas for quick intervention.

“We are in the state following the directive of President Muhammadu Buhari to come and assess the level of destruction to facilitate for quick intervention.

”President Muhammadu Buhari has directed us to also convey his sympathy and to bring succor to the affected communities,” Iyamu said.

He said that the affected persons should expect intervention from the federal government through NEMA within the shortest possible time.

Also speaking in his palace in Demsa Local Government Area of the state, when the delegation visited, Hama Batta, Alhamdu Teneke ,expressed appreciation to President Buhari for identifying with them in their times of trial.

Teneke, however, urged the government to find lasting solutions to the crisis for sustainable peace and development of communities In the area.

He said the traditional instructions were ever ready to work closely with the Federal Government to prevent a breakdown of law and order.

In his remarks, Dr. Muhammed Sulaiman, the executive secretary, Adamawa State Emergency Management Agency (ADSEMA) said that two communities of Bolon and Barai were recently under attacks by unknown gunmen.

Sulaiman said four people were killed, while ten others sustained injuries just as many houses were torched during the attack on Bolon village in Demsa LGA.

During the assessment tour, the delegation visited Barai and Bolon villages and as well as the LCCN Cathedral and Numan general.hospital all in Demsa and Numan. (NAN)