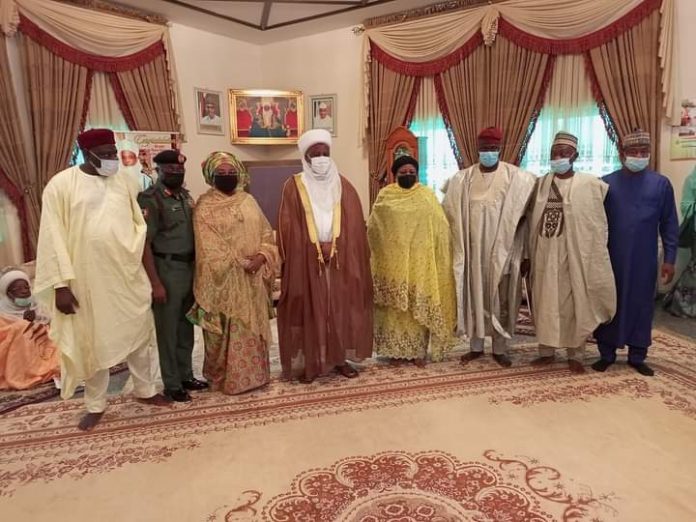 The Governing Board of National Youth Service Corps (NYSC), has lauded Sokoto State Government and the Sultanate Council for prioritising welfare of corps members’ deployed in the state

The Board Chairman, Amb. Fatima Balla-Abubakar, made the commendation in an interview, on Friday in Sokoto

According to the News Agency of Nigeria, Balla-Abubakar had led other board members on separate visits to Gov. Aminu Tambuwal and Sultan of Sokoto, Alhaji Sa’ad Abubakar III, on NYSC governing board and management to cement relationships.

She expressed satisfaction over the government’s commitment to ensuring monthly payment of corps members stipends, as well as providing infrastructure support at the orientation camp.

“I am quite impressed with the condition of Sokoto orientation camp, it is one of the best camps in the country. the hostels and the environment are generally clean, while activities are moving on reasonably fine.

“Corp members and NYSC management enjoy a robust cordial relationship with the state government and the Sultanate Council, as well as obtain all the desirable supports from traditional institutions and government officials.

“This is just to describe Sokoto as unique in terms of adequate care being given to corps members deployed in the state,” Balla-Abubakar noted.

She disclosed that the inspection was part of the board’s efforts to obtain direct information and interact with corps members and officials.

Balla-Abubakar urged corps members to seize the opportunities of skills training provided by the corps to empower themselves for economic development and self reliance.

According to her, Abubakar II, has introduced an annual prize award to corps members who distinguish themselves during the service year, and also donates cows to corps members during each orientation exercise.

She added that the royal father often hosted corps members in his palace during each orientation exercise.

The NYSC board chairman noted that such gestures always motivated corps members and helped to make them feel at home in the communities they were posted to.

She called on leaders to continue to live up to expectations of leadership by providing necessary support to NYSC to ensure success of the scheme and enable it achieve its mandate of promoting national integration.

Balla-Abubakar used the opportunity to congratulate the Sultan on his 15th anniversary on the throne and wished him God’s guidance and protection.