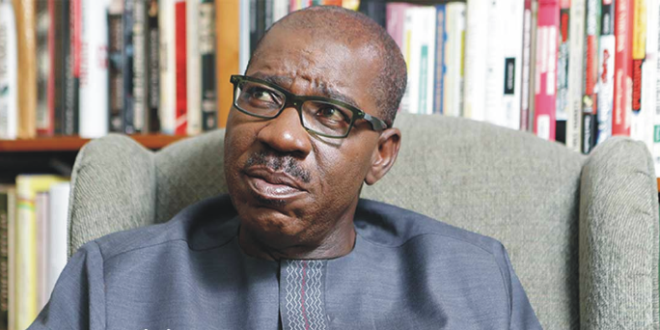 Governor Godwin Obaseki of Edo State on Wednesday signed into law a bill prohibiting forceful and illegal occupation of landed property by Community Development Associations (CDAs) in Edo, after which the governor proceeded to the palace of the Oba of Benin, Oba Ewuare II to present a copy of the law to him.

The Oba, in his coronation speech, had decried the land grabbing that had characterised the CDAs, which had also affected land acquisition and development by citizens and investors in the state, calling for the move to scrap out their activities in the state.

Presenting the bill to the governor for his signature, the speaker of the Edo House of Assembly, Justin Okonoboh said the new law was not only about prohibiting CDA’s activities in the state, but also about prohibiting forceful entry into people’s landed property and protecting widows’ rights to their husbands’ property.

The governor, while he met with the Oba, said the bill was historical and would make the state more receptive to investors and set it on course for more development.

He said: “My administration believes that the way to sustainable development is to unleash and nurture our productive energy and that of investors. Investment will not thrive in a lawless environment, it is a thing of pride that we signed this bill into law”, he said.

Meanwhile, Governor Obaseki also commended the Oba for his support in making the law a success.

“Our land tenure system before and during the colonial era was rated as the best, but it had been turned around by some nefarious activities of CDAs. It was therefore a thing of joy during your coronation that you undertook the task to pull down the CDA structure,” he said.

He, however, urged the Chief Justice of the state and security agencies to support implementation of law in the state, adding that a task force chaired by a retired Inspector General of Police, Solomon Arase had been constituted to drive the enforcement of the law and supervise all matters related to the law.

Noting that many of the youths, who would be affected by the Bill, would be empowered, Governor Obaseki urged the public to be familiar with the provisions of the law and abide by them, adding that ignorance of the law is no excuse.

For his part, the Oba of Benin, a monarch with a rich history, Oba Ewuare II said the new law signified a major milestone both in the Obaseki-led administration his reign commending the governor and the Edo House of Assembly for their swiftness in the passage of the bill into law.

He attributed this speediness to the governor’s readiness to develop the state.

“I want to say that today is historical and I am personally overwhelmed. I was really upset with the activities of CDAs in the state. I saw the need to tackle the issue of CDAs as their actions became destructive. The governor bought into the idea and decided to draft a bill to criminalise their activities. I want to commend him for this step as many people expressed doubts about his willingness to work with the palace, but he has dispelled such fears”, he said.

The Oba also assured the affected youths of his rehabilitation and empowerment.