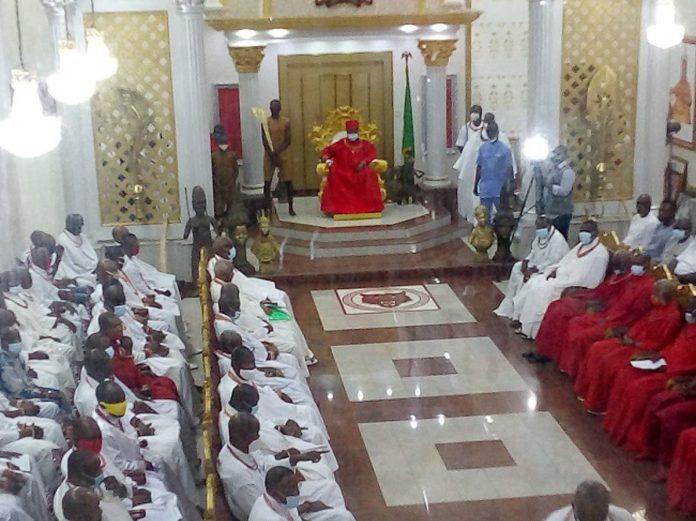 Illustrious sons of Benin, including erudite scholars, historians and traditional rulers have expressed support for the Oba of Benin, Omo N’Oba N’Edo Uku Akpolokpol, Oba Ewuare II, insisting that stolen artefacts belong to the palace of the Oba of Benin and should, therefore, be returned there.

Recall that Governor Obaseki, after a trip to Germany with the Information and Culture Minister, Alhaji Lai Mohammed, had proposed that the artefacts which the German government promised to return to Nigeria in 2022, be domiciled in a museum to be built by the state government.

But the Benin monarch rejected the proposal at a briefing in Benin City, insisting that the artefacts be returned to the palace, since they were taken away from there in the aftermath of the British invasion of Benin Kingdom in 1897.

Reacting, the acting Head of Department, International Studies and Diplomacy, Benson Idahosa University, Benin, Mr. Mike Okemi, said there was no way the Edo State Government can lay claims to the items.

“The artefacts belong to the Oba and they are his personal property. Therefore, those items should be handed back to the Oba. We all know that most of the items were looted from the palace during the reign of Oba Ovonramwen Nogbaisi when the British Army invaded the kingdom. In essence, the items are the property of the forefathers of the current Oba.

Speaking in the same vein, acting Head of Department of History and International Studies, the University of Benin, UNIBEN, Prof Frank Ikponmwosa, opined that the items belong to the Oba of Benin.

READ ALSO: Oba of Benin, Ooni of Ife, 40 others get fresh FG appointments

In his own submission, the Enogie (Duke) of Egbaen, Upper Siluko Edomwonyi Iduozee Ogiegbaen, explained that the artefacts be returned to the original owners, which in this case is the Oba of Benin.

“They must be returned to the Oba’s palace because the first one, they said, was returned in 1938. I wasn’t born then. The second one I witnessed in 2014 during the reign of our immediate past Oba. We all witnessed it, we have photographs with the great-grandchildren of those white men, who came to loot them. They spoke to us and told the Oba that they were being troubled, so they decided to return it.

According to a former governor of the state, Lucky Imasuen, there shouldn’t be any controversy.

He said the fact that it’s a private firm, Legacy Restoration Trust that will now be charged with the responsibility of receiving and managing these art crafts, is unbelievable and unacceptable to the kingdom.

Also a retired Permanent Secretary in charge of arts and culture and former Secretary to Oba of Benin, Daniel Inneh, said: “It is a happy moment that those who carted away our artworks have decided to return these artworks, the palace has been diligently following up, making appeals to different countries, to different ambassadors, to different heads of states over the years.

The Okhaegele (Youth leader) of the Obaretin community, Ambassador George Osagiede, said in his reaction: “As far as I am concerned, the position of the palace is clear, even in the Bible, it said give what belongs to Caesar to Caesar. This is our property and they should not go to any other place except the palace of the Oba of Benin, our palace.”

Meanwhile, legal luminary and a Senior Advocate of Nigeria, Chief Mike Ozekhome said all issues around the controversy would be sorted out over time.