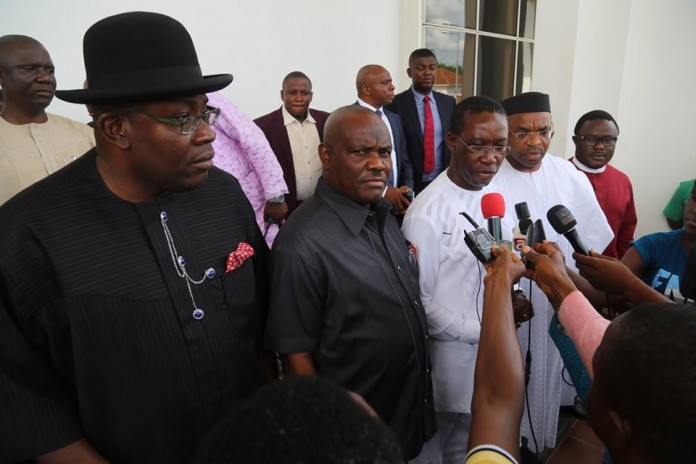 THE federal government is deliberately vague about the alternatives to engaging the militants in the Niger Delta region who have vowed to cripple the economy by blowing up oil facilities and installations. And that is because the government’s options are either not sincere or mischievously opaque. In this matter, both the federal and Niger Delta states’ governors are on the same pedestal of either being outrightly naive or clever by half.

First, this meeting at the Presidency was said to be a closed door meaning that whatever agenda to be discussed are most likely issues of national security. If issues that pertain to our national security were discussed inside the Office of the President (Acting) only to be reported by a media outlet few minutes after, what does that say about leaks in information/intelligence around the highest and most secured office of this nation?

It would have been preferable not to comment on the meeting at the Presidential Villa Abuja between the South- South governors and the Acting President, Yemi Osibanjo, but for the now vexing barrage of insults and abuses arising from alleged leak that the Niger Delta governors asked the federal government to drop all the ongoing corruption investigations involving people of the region as a condition for halting militant attacks on oil facilities and installations in the oil-rich region.

Who gave out this information and to achieve what purpose? We are looking for ways to solve a serious problem that is threatening to cripple the life-wire of our national economy, and all we some people are more interested in scoring political points. It is very unfortunate!
Could the governors have been so daft as to straightforwardly demand in a meeting with a government headed by another party that they want the EFCC to stop investigating the campaign fund scam where the party in power is alleging that the immediate past government shared funds meant for combating Boko Haram among then ruling People’s Democratic Party functionaries?

Curiously, for a meeting that lasted for about three hours, the only thing that was discussed, as leaked, was the governors’ alleged request that the Federal government drop all corruption cases in the region particularly charges against former militants accused of corruption. There is something not adding up here!

Could the meeting have singled out the federal government’s anti-corruption initiative as the reason why Niger Delta Avengers and several other militant groups are blowing up pipelines in the region? The closed door meeting must have discussed other things. It will be good if we also get to know what else was discussed because it is not possible that six governors, the president (acting) and his team including top military and security managers spent over three hours discussing whose corruption cases should be investigated or dropped.

What were the actual motives of conspicuously dragging the name of the minister of petroleum Ibe Kachikwu as “fully supporting the demand by the South -South governors on the request to drop all corruption cases in the region?” Does this not smack of deliberate mischief to cause suspicion and division? Was the minister the only federal government official at the meeting and why were other attendees views not mentioned specifically?

The report from the leak had it that “only the Governor of Edo State, Adams Oshiomhole and the deputy Governor of Cross River opposed the others, who singled out the federal government’s anti-corruption initiative as the reason why Niger Delta Avengers are blowing up pipelines in the region.” Does anyone still need to look far for the origin of this deliberate leak and smear in what was supposed to be a top surreptitious national security discussion?

It was insulting to the entire region for anyone to have declared that “from the tone of the meeting, it was clear that the Niger Delta Avengers and their activities are being funded by politicians in the region with the objective of halting Buhari’s anti-corruption war.”

The question to even ask is: do the sitting governors have a command influence or rather control over the group of people referred to as militants in the various states? The answer is an emphatic no! So how can you use what you are fully convinced in your heart it’s a near-impossibility for you to achieve as a bargaining bate? You see the two- sided deceit?

Though not ruling out political motives from the renewed attacks on oil facilities, the real issue remains that the Niger Delta question has not being sincerely addressed or even genuinely discussed by the federal government- present, immediate past and the archival?

Since what was discussed at closed door was leaked )whether full or selective), the challenge is now on the South- South governors to publicly disclose everything that was discussed at the meeting even the minutes since there is no more security concerns in information management in our seat of power. My governors! My governors! Una know say bros dem no dey carry last! So make una no fall our hand o!

As wise counsel has prevailed with the government trying to find peaceful ways of resolving the problem, what we don’t need now is the self-righteous grandstanding that this leak represented because it is very counter-productive in the case at hand. What should bother all of us is how to halt the attacks on the nation’s oil facilities and installations as this is fast becoming not only embarrassing but grossly inconveniencing to the entire nation and unless something is done- military action, dialogue or whatever to check it, the entire country may slip into an abyss.

Nigeria’s daily crude oil production stands at slightly above 700, 000 barrels a day, a dangerous drawdown from the 2.2 million barrels per day used in syndicating this year’s fiscal budget. And when you factor-in the near-total darkness across the country as a result of unavailability of natural gas to fire almost all the existing thermal power generating stations across the country, do we still need to tell ourselves that this is not the time to play politics but to work together to find a workable solution to this militancy challenge facing all of us.

The deliberate campaign to rubbish an entire region (south-south) with its people, especially in the face of the ongoing violent protests would not do anyone any good, and this is where we should actually sit down to think we are likely being manipulated from outside to continue to disagree with each other as people of one united nation.

Walahi, from all indications, there seem to be some people or group that would not want peace to return to the oil region for whatever reasons. The government should both look far beyond our shores for those engineering and gaining from the renewed conflict in the Niger Delta, it looks more likely too that there are people (agents) in or around government. This assertion may be wrong but supposing it is true? Let’s be wise for once. God bless Nigeria!