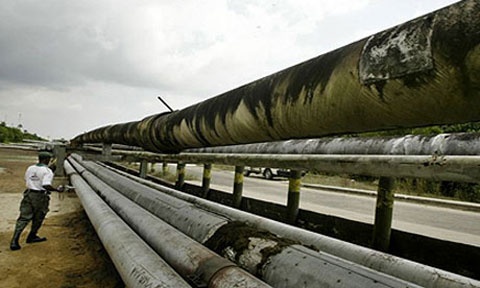 The newly released June edition of the corporation’s monthly financial and operations report (MFOR) showed that 106 pipeline points were breached as against the 60 points vandalised the preceding month.

NNPC’s group general manager, group public affairs division, Ndu Ughamdu explained that the Aba-Enugu axis in the system 2E pipeline corridor accounted for 25 per cent of the total pulverised points, while the Lagos Atlas Cove-Mosimi axis of the system 2B had 23 per cent of the compromised points.

The document indicated that 1.76 billion litres of Premium Motor Spirit (popularly known) as petrol were supplied during the period under review.A breakdown revealed that 58.65 million litres/day of the product were supplied and distributed. It said to sustain supply and distribution in the downstream sector, the corporation ensured daily monitoring of the stock nationwide.

In the gas sub-sector, the report stated that 223.98 billion cubic feet (bcf) of natural gas were produced during the month, translating to an average daily production of 7,466.09 million standard cubic feet per day (mmscfd). The figure was a slight increase of 0.11 per cent over the previous month’s tally. Besides, deficit from the nation’s four refineries hit N17.4 billion during the period, as operations from the facilities remained at a sub-optimal level.

The installations have been operating at just 5.55 percent of their combined capacity of around 445,000 barrels daily.The unsavoury situation underscores the fact that the oil-rich nation still relies heavily on imports for its energy needs.

However, to achieve the 2023 target of local refining, the federal government, last week, said it had begun the overhaul of the facilities, commencing with the Port Harcourt refinery.Giving itself a three-year deadline, the NNPC hopes to review operations of the refineries, support condensate plants and open the midstream sector.

It noted that the Port Harcourt, Kaduna and Warri facilities have continued to record deficit, with losses for the period rising to N17.42 billion. Specifically, the Kaduna installation recorded a shortfall of N9.55 billion; Port Harcourt, N3.79 billion; and Warri, N4.07 billion in March as against combined revenue of N2.01 billion during the month.

No increase in electricity tariff yet, says NERC