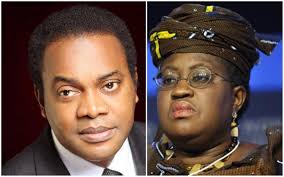 Share this on WhatsApp
Spread the love
Former governor of Cross River state, Donald Duke criticized the former minister of finance, Ngozi Okonjo-Iweala over a statement she made in her latest book, noting that  she left Nigeria poorer than she met it
Okonjo-Iweala, Managing Director at the World Bank, had said in the book, ‘Fighting Corruption is Dangerous: The Story Behind the Headlines’, that Duke asked her not to serve in President Goodluck Jonathan’s government in 2011.
This, she said, was to deny Jonathan’s government credibility so that it would be “weak and not succeed.”
Okonjo-Iweala, who also served as minister of finance under President Olusegun Obasanjo from 2003-2006, said she turned down the advice, which Duke allegedly claimed was coming from “a group of concerned people.”
However, in his response on Twitter, Duke confirmed meeting with Okonjo-Iweala but said it was in good faith and wondered why a private conversation between “friends” has now been made public.
“It is true I met with Ngozi when the rumors were swirling about her being considered for appointment. As “friends”, she having been literally dismissed from an earlier appointment as f1nance minister, I urged caution.
“I made no mention of adding or subtracting credibility to anyone or government.
“It was “two friends” discussing careers. It ended there and she subsequently made her choice which I respected. However, I think it is in poor taste and demeaning of her to report a private conversation in whatever self-laundering attempt she may be up to. With hindsight, I was vindicated, Ngozi, as Minister of Finance and Economy, despite massive revenue receipts, left Nigeria poorer than she met it.