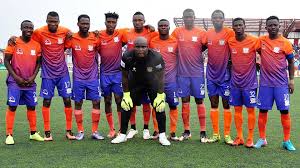 Sunshine Stars Sikiru Alimi was coasting to his second win of the Nigeria Professional Football League (NPFL) VAT Wonder Goal award but was edged by Nasarawa United’s Najeem Olukoku who secured higher votes on the website platform. It would have been a record win for Alimi this season after he was voted the winner of the Match Day 16 award.

Alimi’s goal secured the highest votes on twitter, polling 187 of the 519 votes while Najeem came second with 156. Other nominees, Reuben Bala of Plateau United and Seka Pasca of FC IfeanyiUbah ended with 88 votes each.

But it was on the website that attracted more voters that Najeem had his way securing a whopping 3303 votes to Alimi’s equally impressive 1057 votes. Bala had 50 votes while Seka could only muster 22 votes.

In all, there were 4951 fans who voted across both platform and Najeem clinched the award with 3460 votes with Alimi trailing him in second place with a total of 1244. For Bala, the total votes came to 138 and Seka 110.

Najeem is the first Nasarawa United player to top the awards since it was instituted three seasons ago and will receive a cash reward of N150,000, half of which will be donated to a Charity organization he will nominate from the city where the club is based.

He joins the elite list that includes Rivers United duo of Emeka Ogbugh and Sochima Elum, Alimi, Rangers duo of Kelvin Itoya, and Tope Olusesi and Sikiru Olatunbosun of MFM that have won the award this season.

The award will presentation ceremony will hold at the Lafia Township stadium on Sunday when Nasarawa United hosts Enyimba international on Match Day 24.

The VAT Wonder Goal is an initiative of the League Management Company (LMC) to extend club and community engagement through charity. It has been supported by the Federal Inland Revenue Service (FIRS) as part of its tax education campaign to enlighten citizens on the benefits of fulfilling their tax obligations.