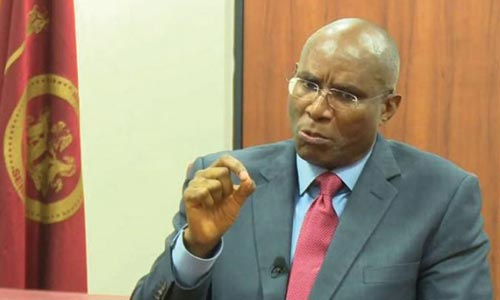 Senator Ovie Omo-Agege, representing Delta Central Senatorial District in the National Assembly, has threatened the Senate and the President of the Senate that he cannot be prevented from resuming duties in the Upper Chamber under whatever legal action in compliance with the judgment of the Federal High Court.

Apparently, the senator’s daring of the authority of the Upper Chamber and threatening to defy the pending appeal suit, is already generating tension over another invasion of the Senate. It was in similar desperation to resume legislative duties that embattled senator invaded the Senate with thugs on April 18.

The embattled senator whose reputation has been under public scrutiny since the invasion of the Senate and the stealing of the mace during plenary by hoodlums who accompanied the senator to the Chamber, maintains that notwithstanding the appeal filed by the Senate and the President of the Senate, Dr. Bukola Saraki, against the Federal High Court’s judgment nullifying his suspension, he will still resume legislative duties.

The senator argued that the Senate and Saraki have only applied for a stay of execution at the Court of Appeal which has not been granted. He insisted that the lower court made a declaratory judgment which had an immediate effect.

Omo-Agege said Saraki is seeking the relief for a stay of execution from a court of law which he had ignored and gone ahead to approve his suspension.

The Senate had on April 12, 2018, suspended Omo-Agege for 90 legislative days over his public statement that amendment of the Electoral Act and reordering of the 2019 elections timetable was targeted at the president. As the Senate began investigation of the statement, Omo-Agege ran to the court to seek protection from being sanctioned by the Senate.

Omo-Agege had on April 18, one week after his suspension, gone to the Senate in the company of hoodlums who he cleared at security checkpoints that they were with him, and the mace of the Senate was violently taken away from the Upper Chamber by hoodlums who entered the Senate with the senator.

The Senate following the incidence, ordered the Sergeant-At-Arms not to henceforth allow Omo-Agege entrance into the Chambers till his suspension is over.

Justice Nnamdi Dimgba, in the judgment, ruled for the reinstatement of the senator.

Mahmud Magaji (SAN), Counsel to the Senate and the Senate President, was gathered to have said that he had filed notice of appeal, as well as an application for stay of execution of the judgment reinstating Omo-Agege.