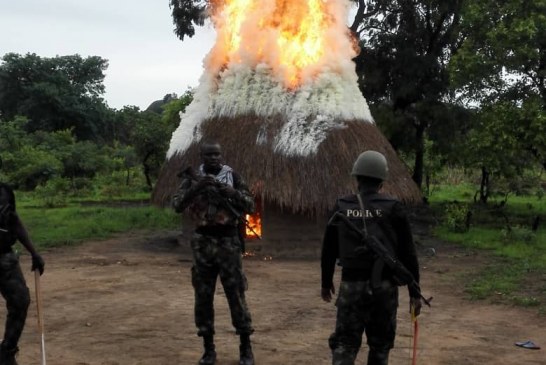 Troops of Operation WHIRL STROKE operatiing under Operation ACCORD deployed at Gbise in Katsina Ala LGA in Benue State and  Sector 4 in Taraba State conducted a joint commando raid operation in the early hours of 29 June 2020 at Rafin Kada in Wukari LGA and Yojaa in Donga LGA of Taraba State. This is contained in a press statement by Major General John Enenche, Coordinator Defence Media Operations. According to the statement, the troops came in contact with suspected Tiv militias at Che Jukun village. The armed militia opened fire on the troops who responded with superior firepower thereby neutralizing 4 of them in the process while unconfirmed number escaped with gunshot wounds. Items recovered include; 2 locally made rifles, 55 rounds of 5.56mm ammunition, 117 rounds of 7.62mm ammunition, 3 mobile phones, 3 AK 47 magazines, 2 motorcycles, one military shirt uniform, one Peace Corps ID Card belonging to one Mr Anyor Fidelis and some charms.

In another development, the statement also stated that the ⁹troops responded to a distress call from Zaki Biam on the activities of a notorious kidnap kingpin by  name Kobo Ishor (aka “Lesser” ) an associate of late Orjondu. He was apprehended and currently undergoing interrogation, to be handed over to the Nigerian Police afterwards for prosecution.

For this, the High Command of the Armed Forces of Nigeria congratulated the gallant troops of Operation WHIRL STROKE for their dexterity and professionalism and encourages them to remain resolute in curtailing the activities of criminals in the North Central Zone of the Country.