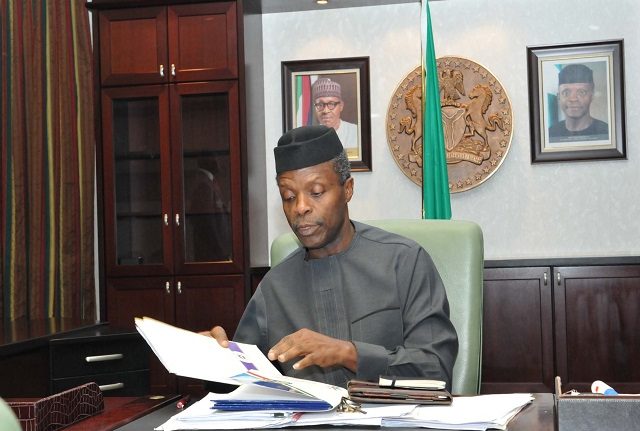 SECTION 2 (3) of the Economic and Financial Crimes Commission (Establishment) Act, 2004 unequivocally provides that the EFCC shall have a Chairman who “shall be appointed by the President and the appointment shall be subject to confirmation of the Senate.” The Muhammadu Buhari Administration complied with this provision by sending Mr. Ibrahim Magu’s nomination to the Senate for confirmation. That was way back on the 9th of November, 2015, when President Buhari appointed Magu as Chairman of the EFCC in an acting capacity. The Senate found it difficult to confirm him as it allegedly found putrefying skeletons in his cupboard. Nevertheless, the President re-presented Magu’s nomination twice to the Senate, to no avail. As no flicker of light could be seen at the end of the tunnel in spite of the fervid efforts by the Buhari Administration to retain Ibrahim Magu at all costs, the Presidency decided to devise a legal stratagem.

The brilliant and piquant-witted Professor of Law, endowed with sharp, appetizing intelligence, who is also a Senior Advocate of Nigeria (SAN), Yemi Osinbajo, Nigeria’s Vice-President (and now Acting President), came in handy as he threw his big hat into the Senate-Magu ring and suggested that, in view of the provisions of section 171 of the Constitution of the Federal Republic of Nigeria, 1999 (as amended), the President should not have sent Ibrahim Magu to the Senate for confirmation, in the first place, relying, in all probability, on paragraph (d), subsection (2) of that section, according to which the President is empowered to appoint and remove certain officials specified in subsection (2) of the said section 171 without reference to the Senate. In view of the esteemed source whence this argument emanates, there is a compelling need to quote that section in extenso.

(a) Secretary to the Government of the Federation;

(b)Head of the Civil Service of the Federation;

(c)Ambassador, High Commissioner or other Principal Representative of Nigeria abroad;

Permanent Secretary in any Ministry or Head of any Extra-Ministerial Department of the Federation howsoever designated; and

(e) any office on the personal staff of the President.”

The underscored paragraph (d) of this section, on which Prof. Osinbajo most probably relied, does specifically mention the EFCC, and it is anathema to smuggle any extraneous matter into the Constitution, the grundnorm of the Nigerian legal system.

It would be pertinent here to distinguish an “extra-ministerial department” from a “Commission”, which the EFCC is. No one can apply any of the various canons of statutory construction to equate “an extra-ministerial department”, usually tied to the apron strings of a particular Ministry, such as the National Institute for Freshwater Fisheries Research (NIFFRI), with a “Commission”, such as the Independent National Electoral Commission (INEC), established with in-built autonomy, to perform an assignment of national, in contradistinction to a particularistic, interest. The EFCC cannot, and should not, be to the Ministry of Justice what Radio Nigeria is to the Ministry of Information and Culture, or what a General Hospital is to the Ministry of Health, for instance!
While “an extra-ministerial department” (mentioned in section 171 of the Constitution) is a miserable appendage of a Civil Service Ministry and is usually susceptible to the whims and caprices of its political head, the Minister, a “Commission” is a well-neigh autonomous or fully autonomous institution, headed by a puissant functionary (Chairman), vested with substantial powers to carry out certain functions of national interest. Such a Chairman (like the Chairman of INEC, for example) is NOT a lickspittle or toady in his relations to the President by virtue of the latter’s powers to appoint and remove the former. This explains why all the five Commissions and Councils created by section 153 (1) of the Constitution are headed by Chairmen appointed by the President, subject to confirmation of the Senate, under section 154 thereof. If the Constitution, in section 154, provides that all the Chairmen of Corporations must be appointed by the President, subject to confirmation by the Senate, one wonders why the Chairman of INEC should be the odd man out.

Imagine if the President was empowered to appoint and remove the Chairman and other members of INEC, a Commission charged with the responsibility of acting as an umpire in the electoral process of which the President and his political party are beneficiaries, without reference to the Senate! The relationship between the EFCC and the Ministry of Justice is no more intimate than the relationship between the Central Bank of Nigeria (CBN), a national institution, and the Federal Ministry of Finance. Section 8 of the CBN Act, 1958 (as amended by the CBN Act 2007, are in pari materia with section 2 (3) of the EFCC Act. That tenuous relationship between the Ministry of Finance and the CBN does not make the latter an extra-ministerial department of the former!

To suggest that section 2 (3) of the Economic and Financial Crimes Commission Act, 2004, which insists that, while the President appoints the Chairman of the EFCC, the Senate must confirm the Chairman’s appointment, is inconsistent with the provisions of section 171 of the 1999 Constitution (as amended), is to fly in the face of the in-built checks and balances provided in the Constitution to preclude the exercise of arbitrary power and, a fortiori, to affront the principle of separation of powers.

Such an eerie suggestion, with the profoundest respect to the respectable and learned Acting President, who, incidentally, was also my former lecturer, is contra publico (against public interest) and a recipe for authoritarianism and tyranny, characteristics of which are already being wantonly exhibited with nonchalant abandon! Besides, such a suggestion will exacerbate an existing situation whereby the EFCC’s acting Chairman, Ibrahim Magu, torments the real and perceived enemies of his appointor, the President, by arresting, and keeping arrested, people (such as Col. Sambo Dasuki) in Nigeria’s equivalent of the Gulag archipelago for days, months and even years on end, without trial, contrary to the entrenched provisions of the Constitution. Additionally, and finally, such a suggestion could never have been in the contemplation of the draftsmen of the Constitution!