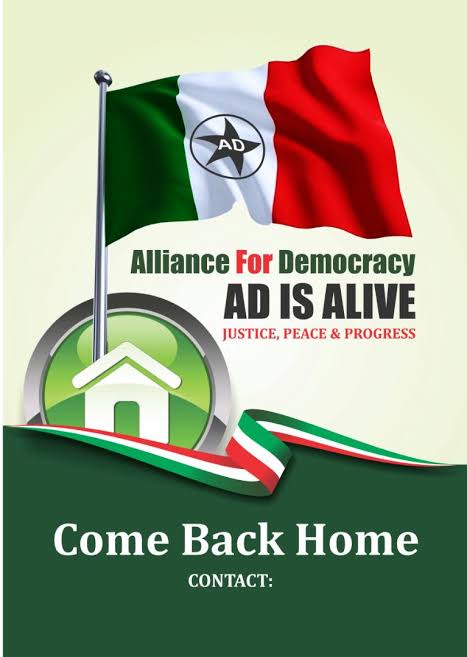 The Alliance for Democracy (AD) on Friday declared support for the re-election of Gov. Gboyega Oyetola, the All Progressives Congress (APC) candidate in Saturday’s governorship election in Osun.

This is contained in a statement issued by the Chairman and Secretary of the party’s Convention Planning Committee, Malam Abdallah Muktar  and Mr. Kola Ajayi.

The statement urged members to work for the re-election of Oyetola, being part of the progressive party just like the AD.

The News Agency of Nigeria reports that AD, one of the de-registered parties by the Independent National Electoral Commission (INEC), is not allowed to field candidates for the gubernatorial election.

“At the leadership and stakeholders meeting held in Iwo, Osun State on May 01, it was generally agreed that the party should work in agreement and support the candidature of His Excellency Isiaka Adegboyega Oyetola, in the coming elections in Osun State on July 16.

“All our members, loyalists, and stakeholders are by this declaration hereby directed to go out and vote Gov.Oyetola for a deserved second term in office.

“We equally enjoin all the good people of Osun State to vote Gov. Oyetola for continuity in good governance,” it said.

Similarly, the party congratulated Sen. Bola Tinubu on his emergence as the winner of the APC presidential primaries recently.

The statement recalled that Tinubu was one of the governors on the platform of the Alliance for Democracy (AD) in 1999.

According to it, Tinubu remains the only surviving governor on the platform of the AD in the Southwest in 2003, and he is the only man standing for progressive politics in Nigeria.

It said that Tinubu, a two-term former governor of Lagos State, fought hard and brought back to the Progressives’ fold other states such as Ekiti, Ondo, Osun, and Edo among others.

The statement described Tinubu as a man of ideology, one who believed in party discipline and supremacy as well as in the vision and ethics of the AD.

“The leadership of the party congratulates him (Tinubu) on his well-deserved victory at the APC primaries and his emergence as the party’s presidential flag bearer.

“The party assures Asiwaju Bola Ahmed Tinubu of its unalloyed support throughout the length and breadth of the country as one of us, and promised to work tirelessly to ensure victory for Asiwaju at the elections in 2023,” it said.

Your mandate is to mobilise workers, not select candidates, Labor Party, tells NLC