Friday March 27, 2020 will remain indellible in the hearts of over 3 billion participants who witnessed an avalanche of Miracles, Healings and Salvation during the Global Day of Prayer where President of loveworld Incorporated Pastor Chris Oyakhilome declared a sentence on Covid-19 as dead.

The participants from around the world, rejoiced exceedingly at the declaration after sessions of fervent prayers by Pastor Chris that Corona virus (Covid-19) is dead.

The Global Day of Prayer with Pastor Chris and Pastor Benny Hinn, held on Friday, March 27th, recorded a staggering live participation of over 3 billion people from around 247 countries of the world, including from the Vatican. The global audience watched the live broadcast via several satellite/terrestrial TV stations, radio stations and various internet platforms. It was a historic event, uniting the body of Christ in prayer against demonic activities ravaging the nations of the world. It is to this day probably the largest prayer program ever held on earth.

Pastor Chris, Pastor Benny Hinn and other ministers of the Gospel led the congregation in fervent prayers to put a stop to the Coronavirus pandemic that had created a lot of uncertainty across the nations. Pastor Chris, Pastor Benny Hinn, and Bishop Clarence McClendon, also took out time to exhort God’s people, opening their understanding to the peculiarity of the times and the spiritual import of the current happenings in the world today.

The Prayer programme also frontally addressed the fears being spread about the Covid-19 and its negative impact on the nations. To this end, God’s people were encouraged not to entertain fear but to stand in the gap for the rest of the world as the Church remains the restraining force against evil in the world today.

Various prayer points were raised for the governments of the world, for the church and against the demonic COVID-19 epidemic. God’s people prayed fervently, unleashing their faith-filled words to effect the desired chamges in world affairs. Then the man of God, Pastor Chris declared the Coronavirus dead, stirring up great rejoicing across the globe. Gospel music sensation, Sinach, led the congregation in a song of victory over COVID-19 and other diseases. There was great celebration all around the world. The church prevails.

#PastorChris, who led the global congregation in a session of prayers was joined by senior Pastors like Pastor TT Edun, Pastor (Dr.) Deola Phillips, Pastor (Dr.) Emeka Eze and Pastor Lanre Alabi on set, while Gospel music sensations, Sinach, and Eben were exceptionally electric leading the global audience in songs of Worship, Praise and celebration.

#PastorChris in the end declared a 7-Day-Prayer and Fasting program to consolidate on the victory over COVID-19. According to the Cleric, Live broadcast of the 7 days prayer program which began on Saturday, March 28th would be broadcast from 7pm GMT+1, 2pm EST, on all LoveWorld Networks and various internet platforms. Pastors Chris and Benny Hinn urged Christians all over the world to be part of it and also encourage others to do the same. 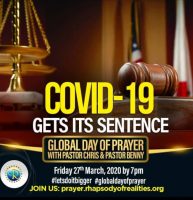 Effectively, every country on earth on all continents (Africa, Europe, North America, South America, Asia, Oceania) had people watching or listening and praying during the Global Day of Prayer. Findings by National Daily revealed that the worldwide participation was made possible through live broadcast through 406 local TV stations in 95 countries but covering practically all known territories of the world.

Specifically, in Nigeria alone, the event was broadcast on 138 local TV stations in all 36 states including the Federal Capital Territory, Abuja.

The Radio Stations were not left as 472 Radio stations in 190 countries joined in expanding the coverage of the #GlobalDayofPrayer.