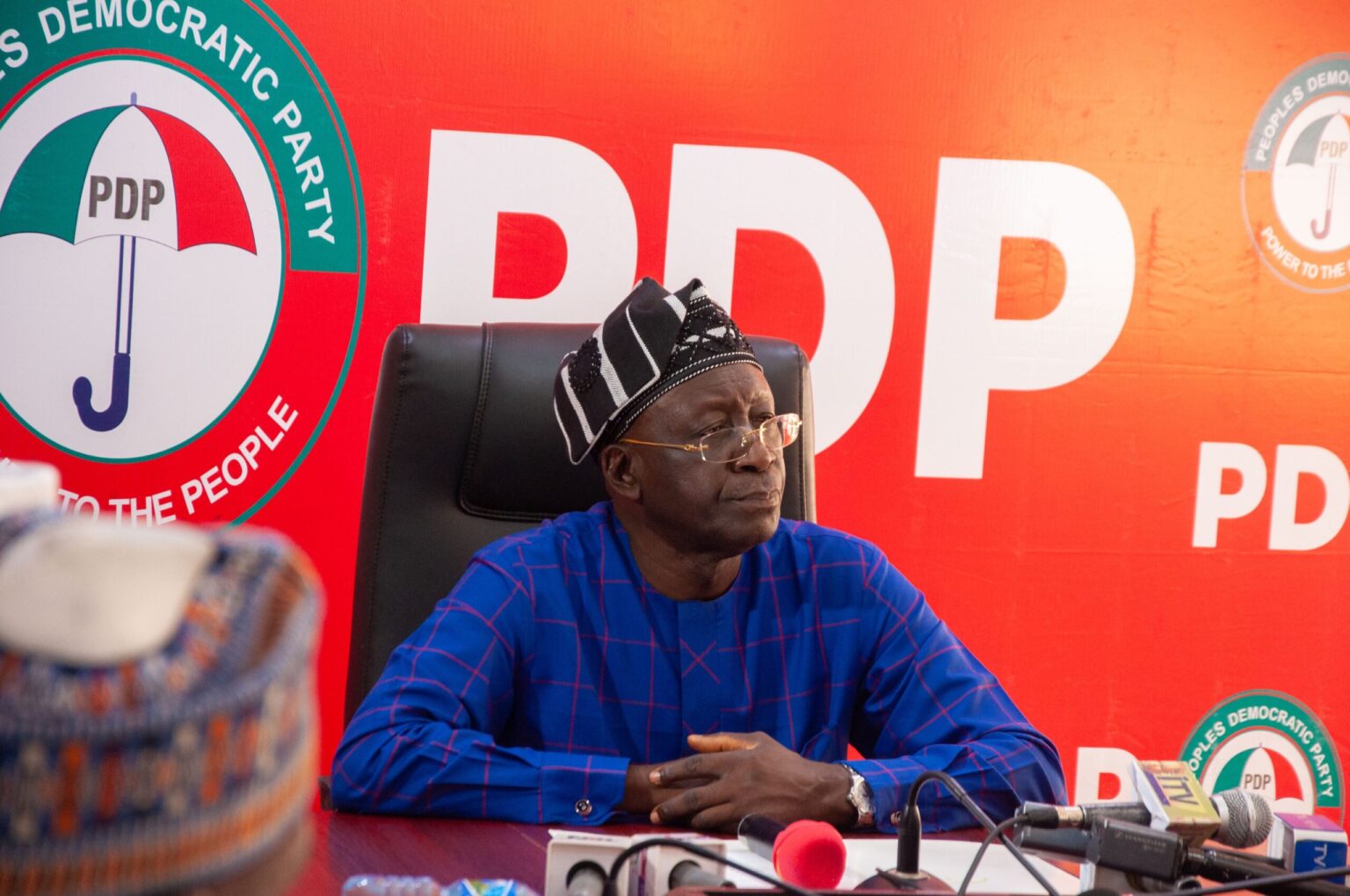 “He became National Chairman, the main opposition party lost some states to the ruling party, the number of State branches with internal crises increased tremendously and tenaciously and the once united and national outlook party became divided nationwide than ever as a result of ethnic bigotry…Ayu must go has become inevitable…” _ Dr. Enahoro

The National Chairman of the People’s Democratic Party-PDP,  Sen. (Dr.) Iyorcha Ayu in his usual inabilities to hold or retain office as a result of incompetence and lack of promise-keeping is once again displaying leadership inefficiency; promoting ethnic bigotry, showcasing the poverty of the brain, publicly exposing the emptiness of his stomach, personalizing the party by using his office as a tool to promote his family, destroying our party with careless statements capable of dividing the party more, a system that is already battling to put its house in order, and totaling moving away from the basic principles and ideas of our party that was once known for its nationalistic vision.

Born in Gboko in Benue State on November 15, 1952, Iyorchia Ayu is a Nigerian Politician, a former Nigerian Senate President during the Nigerian Third (shortest) Republic (1992-1993) put together by the former Military Head of State, General Ibrahim Badamonsi Babaginda, GCFR aka IBB De “Evil Genius”, and later served as Minister under the Gen. Sani Abacha Military junta, twice in three ministries in the Cabinet of President Olusegun Obasanjo between 1999 and 2007 now the PDP National Chairman. That is, Ayu served at various times as the Federal Minister for Education and Youth Development (Abacha regime); Industries (Obj); Internal Affairs (Obj); and Environment (Obj) and is currently the national chairman of the People’s Democratic Party (PDP). Ayu had taught sociology at the University of Jos in Plateau State, including courses on the art and science of Marxism, and was the Chairman of the Jos University chapter of the Academic Staff Union of Universities (ASUU).

After entering politics, he was influential among the majority of Tiv people in his home state of Benue. He was elected Senator in the Third Republic on the platform of the Social Democratic Party-SDP and became Senate President.

In November 1993, Ayu was impeached by the members of the Senate because of his lack of understanding of national politics and for the national interest.

As one of those who secretly worked against the best Nigerian President we never had (in the person of MKO Abiola) during the political negotiation in the Interim Government of Chief Ernest Shonekan for which the action finally truncated the third republic, Ayu was later appointed the Minister for Education in General Sani Abacha’s military government that seized power from the Shonekan’s Interim regime as compensation and later became among those Abacha was using to navigate his evil plans to succeed himself from Military Head of State to a civilian President. Unfortunately, there was divine intervention and Abacha died mysteriously and the evil Government collapsed for the emergence of General Abdulsalam Abubakar, GCFR.

In 1999, GAA became the first Military Head of State who put a civilian government together in less than a year and Chief Olusegun Obasanjo, GCFR became the first Nigerian Military Head of State and elected President of Nigeria. Thinking Ayu will be very useful to his Government, Obj appointed him to head the Ministry of Industry _*but was sacked in 2001 for “lack of understanding of national interest and inability to revive the industrial sector which still largely remains comatose under him as it were.”

In December 2005, Obj dismissed Ayu as Minister and gave no reason. In a Vanguard report on December 21, 2005, titled FG Sacks Ayu” written by Charles Ozoemena & Ndidi Onuora, “The Federal Government, yesterday, sacked the Minister of Environment, Dr. Iyorchia Ayu, making it the second time that the one time Senate president would be relieved of his appointment under President Olusegun Obasanjo’s administration. The first time was in 2001 when he was minister of Industry. No reason was given this time for relieving his appointment. A statement issued by Presidential spokesperson, Remi Oyo, officially confirmed his sack in a two-paragraph statement she signed. Titled “Ayu Relieved of his Duties”, the statement said that “The Minister of Environment, Dr. Iyorchia Ayu, has been relieved of his appointment…”

When Ayu was sacked second time as  Minister of Environment, he prostituted from PDP to the Action Congress of Nigeria, ACN. In February 2007, Ayu was arrested and later arraigned by a Federal court on charges of terrorism.

He was later released on bail. He was the Director General, Atiku Campaign Organization in the Adamawa-born politician’s second bid but third ambitious time to be Nigerian President.

Since he entered politics in 1989, H.E. Alhaji Atiku Abubakar has unsuccessfully contested five times for the Office of President of Nigeria in 1993, 2007, 2011, 2015 and 2019. In 1993, he contested the Social Democratic Party presidential primaries losing to Moshood Abiola and Baba Gana Kingibe. In 2003, Atiku had the ambition to unseat President Obj who practically knelt down for Atiku to enable the head of the retired military mafia to return to Aso Rock for his second term. After Atiku’s camp lost to Tinubu’s camp in ACN, like the typical Nigerian political domain, where the ” winners take it all and losers suffer alone”, Atiku abandoned him to Dubai, like most of us today, poverty eroded Ayu and he went into political oblivion.

As a normal serial prodigal son, Ayu returned to PDP in shame and started romancing with those he now called children. The likes of H.E. Governor Nyesom Wike of Rivers State, Samuel Ortom of Benue State, Umar Fintri of Adamawa State, Seyi Makinde of Oyo State, Duoye Diri of Bayelsa State including even Ifeanyi Okowa of Delta State (while still part of the democrats in PDP) and with a guarantee from the former Senate President, H.E. David Mark, the ‘children led by Wike installed Ayu as National Chairman of the PDP in 2021. Wike singlehandedly bought Ayu a new branded bulletproof Land Cruiser Jeep 2021 model or a more recent model.

In December 2021, it was reported in national dailies how the Buhari Media Organization (BMO) accused Ayu of criminal revisionism and called him a criminal revisionist. To prove their point, he was almost sunk in a fraudulent case as the likes of Wike, Ayu and co secretly and quietly begged, came to his help for Ayu to return about N405m, to save our party from embarrassment. In a National Daily, it was reported that “the National Chairman of the opposition Peoples Democratic Party, Iyorchia Ayu, has returned N405 million, which he was accused of fraudulently receiving from the former National Security Adviser, Sambo Dasuki, sources familiar with the matter have told PREMIUM TIMES.

The new media also reported that, “…when Mr. Ayu delayed refunding the money, a mansion he owned in Abuja was seized from him. The property was returned to him after he paid up….”

At the beginning of 2022, the National Chairman of our party was accused by his fellow National Working Committee members that, “Ayu has turned the party into his personal property and that he now attends party activities using his children and family members as members of his entourage denying fellow NWC members such privilege of their offices.”

They almost removed him and the same Team Wike now children came to his rescue. At Edo State, in the name of coming to solve the Edo PDP crisis, Ayu practically demanded that the Government of Edo State should apportion him a piece of land for his family in Edo. A source said, he became a “tax collector” from Edo State Government hence the reason he has not been able to fairly resolve the Edo PDP crisis.

In the heat of the PDP presidential primary, Ayu refused to honour the arrangement that brought him as the National Chairman by zoning the position of the party presidential flag bearer to southern Nigeria.

How come the likes of Wike and co forgot that Ayu is an Atiku ally, co-traveler from PDP to ACN, was his 2007 DG and could not have partaken in anything that will exclude the Adamawa born politician from the race? Could that be a political miscalculation? Why was the choice of David Mark as National Chairman changed? I guess it was the same Atiku reason.

Ayu openly thanked Governor Aminu Tambuwal for betraying the man who collected bullets on his behalf while he bided to be Nigeria’s President in 2019.

How can a Party’s National Chairman who wants to win a general election from the opposition position be at the centre of mischievousness, division, controversies, embarrassments, and party crises from the state to the National level?

Considering the above, it is now very clear that the embattled PDP National Chairman, Sen. Iyorchia Ayu is not ready to learn from his past mistakes and has the bad luck of being sacked from office prematurely. He should therefore humbly and quietly resign to save his face from further embarrassment in his own interest and in the interest of the party. This will help him to stop more revelations of his dirty deals. And PDP needs to save itself from hate and accusations of being led by a mischievous leader and like BMO said, “a criminal revisionist”.

As it presently stands, #AyuMustGo has become inevitable.