The Nigeria Police after battling a gang of cultists for over three hours, arrested 39 suspects, recovering firearms.

The Police Public Relations Officer (PPRO) of the Lagos State Command, DSP Bala Elkana, narrated that the operatives worked on reliable intelligence, which made the Operation Crush teams attached to Bariga Police Station led by the Divisional Police Officer raid the cultists’ hideout at Bariga.

The operation, he said, lasted three hours, 10 minutes, adding that the Team apprehended one Danjuma Bala, a notorious cultist, and 18 other members of his gang within ages 20 and 45. 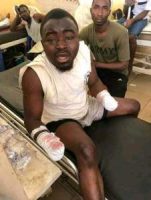 “On 12th June, 2019 at about 3.00am, Operatives of Operation Crush from the Anti-Cultism Unit, led by the OC Anti Cultism, CSP Frank Nelson stormed cultists hideouts at Oshodi where one Ayuba Balogun, a cult leader and three members of his gang were arrested” Elkana narrated.

The PPRO also said that two automatic guns were recovered from the suspects while investigation led the team to Mangoro area, Dopemu, Agege at about 7.00am, where one Segun Moyo and one other member of their gang were arrested.