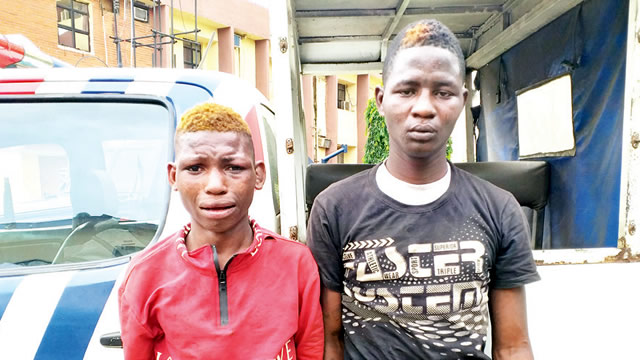 A robber operating on spots of slow traffic, Taofeek Adebayo, being disappointed from stealing cash from a female victim, swallowed her wedding ring while he threatened to kill her. However, luck ran out of the traffic robber when he was apprehended in conjunction with three other suspected traffic robbers by the Rapid Response Squad (RRS) of the Lagos State Police Command at Oshodi and CMS axis last Friday.

It was gathered that Taofeek Adebayo and his accomplice, Toheeb Tijani, were arrested at Oshodi – Oke after robbing two ladies driving in a grey Sienna Toyota of gold ear–ring and a set of wedding rings.

The other suspects, Samson Oluwa, and Michael Amodu Adamu, were said to be arrested in an all-night sting operation in CMS.

It was narrated that Taofeek Adebayo and his gang had last Friday begged the two ladies in the Sienna to give them money to buy food. The ladies were said to have given them N100 but the robbers rejected it and descended on them violently.

The Lagos State Commissioner of Police, Muazu Zubairu, was said to have assured that the police would not relent on their efforts to secure Lagos and make it safe for law abiding citizens.

The CP was said to have directed that the suspects be transferred to Makinde Police Division, Oshodi and SCID, Yaba.