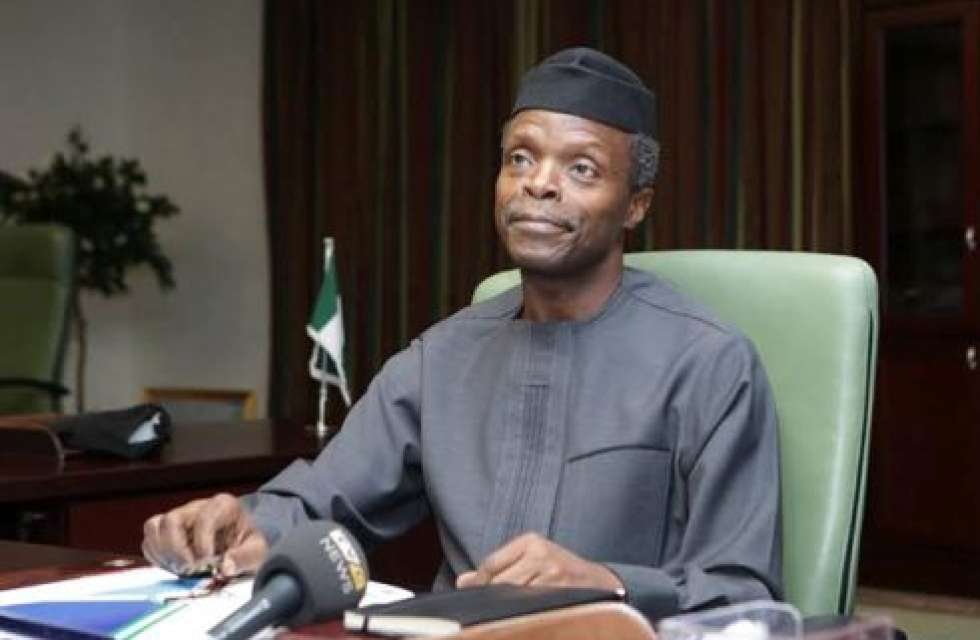 “If there is one person in Nigeria that believes that petroleum prices should not go up by one Naira, it is President Buhari,” Vice President Yemi Osinbajo, SAN, asserted earlier today at a public book presentation event in Abuja.

Explaining the difficult decision announced last week by the federal government, Prof. Osinbajo said the President simply had no other option.

Although the President did not want the fuel price to go up, the Vice President said “he is left with no choice. What can we do if we don’t have foreign currency, we have to import fuel.”

While observing the petroleum products are being imported today into the country, he asserted that even “if we repair our refineries today, we would still be able to refine 40% of our petroleum, so we still need to import.”

Prof Osinbajo then raised a rhetorical query:  “in the absence of foreign exchange and you have to import your refined petroleum, what are you left with?

The Vice President who spoke at the public presentation of Anatomy of Corruption in Nigeria: Issues, Challenges & Solutions, a collection of essays edited by Yusuf O. Ali, SAN, asserted that “a lot of the problems associated with the refineries are corruption related.”

He also attended the public presentation of Prof. Ladipo Adamolekun, who just published his autobiography, I Remember.

According to the VP, corruption “explains why many States are owing salaries and continue to owe salaries.”

Furthermore he noted that “when we look at corruption and its deleterious consequences, we must relate it directly to what we are experiencing at this time.”

Driving home the point about the consequences of corruption, the Vice President said “When you consider that today, Nigeria’s reserves stands at about $27billion and we are investigating $15billion from one sector alone. That is over half of the entire reserves of the country.

“How we dimension the problem must be different. We can not look at it the same way as if it is just petty stealing. This is not just stealing the resource of the country, it is stealing the future as well.

“Let me just state one clear example. All through the period when Nigeria was earning over 100 – 115 dollars in proceeds of oil for a period of almost 5 years, the external reserves of Nigeria remained much the same. It did not (significantly) increase at all despite the very high earnings.

“And that is why we have the situation that we find ourselves today. It is the external reserves that a country resorts to as a last resort in protecting its currency.”

Doing a quick international comparative analysis using another oil-producing country, the VP said “when countries were experiencing these high prices, some countries were putting money aside, Saudi Arabia saved over $700billion,-(as at last year) so when their currency began to suffer, of course they were able to shore up their currency with their reserves.”

In the case of Nigeria however, Prof Osinbajo lamented that “we are unable to do so. And the reason is because the reserves have been depleted. It is the same reason why it is difficult to do very very many other things  that we should be doing as a nation.”

He then declared that corruption poses an existential threat to the country.

“I want to just very quickly say that corruption has no label. It is not just a social evil, it is an existential threat to our country. There is no doubt at all that this is unlike other countries, (where) people say that there is corruption everywhere, which is true.

“But I think the one distinguishing feature for Nigeria and for many other countries like ours  is that it is a threat that directly affects the lives and livelihoods of everyone.

“All of the defenses that people put forward, that, oh! it is the Igbo man, oh! it is the Hausa man, it is Yorubas, and so on, none of that is demonstrated by the facts.

“I want to assure you that the government of President Buhari is determined to fight corruption, and that despite whatever those naysayers may say, we would fight it with everything that we have and we will leave a legacy in this nation of at least a government that chose to stand by principle and chose to stand by doing things right.”

How realistic is the call for N56,000 new national minimum wage?