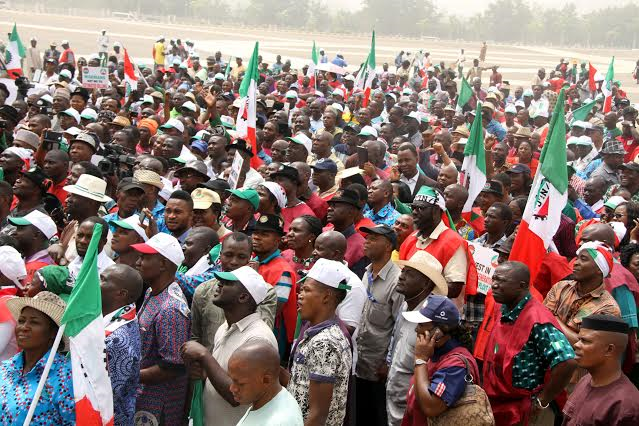 Justice Babatunde Adejumo of the National Industrial Court sitting in Abuja has stopped the Nigerian Labour Congress, NLC, and the Trade Union Congress, TUC, from embarking on a strike action Wednesday.

In a ruling on Tuesday, the NIC president restrained the labour unions, at least for seven days, from going on strike, pending the determination of a suit the federal government lodged before it.

Neither of the unions had lawyers representing them during the ruling.

In a communique they issued at the end of an emergency meeting the held on Saturday, the labour unions vowed to embark on a nationwide industrial action if the federal government refuse to reverse the hike in fuel price from N86 per litre to N145 per litre.

The order followed an ex-parte application that was filed by the Attorney General of the Federation and Minister of Justice Abubakar Malami on Sunday.

Relying on section 14 of the 1999 Constitution, as amended, the AGF insisted that it would not be “in national interest” for the NLC and TUC to proceed on nationwide strike over the fuel price increase.

According to him,  ‎no amount of damages could serve as compensation if the labour unions are allowed to shut down the economy.

He also prayed the court to determine “whether the NLC and TUC have complied with the laid down condition for embarking on strike‎”; and “whether indeed there exist in law and in fact the basis of which the respondents’ total closure of the economy can be justified”.

He told the court the unions not only threatened to shut down the country, the also vowed to close down all government offices, seaports, airports and markets.

In his argument, the AGF said ordinary and law abiding citizens would be subjected to hardship if the respondents were allowed to go ahead with their threat. And that is why the government sought the intervention of the court.

Besides, Malami told the court that he got notice of the communique on Sunday and quickly filed an originating summons, a motion on notice and an ex-parte application to determine whether NLC’s decision was justifi‎ed in the circumstance.

He insisted that “great and irreparable damage” would be done against the nation and “ordinary and law abiding citizens”, should the court refuse the ex-parte application.

The NIC judge ordered the service of all the relevant court processes on the unions.