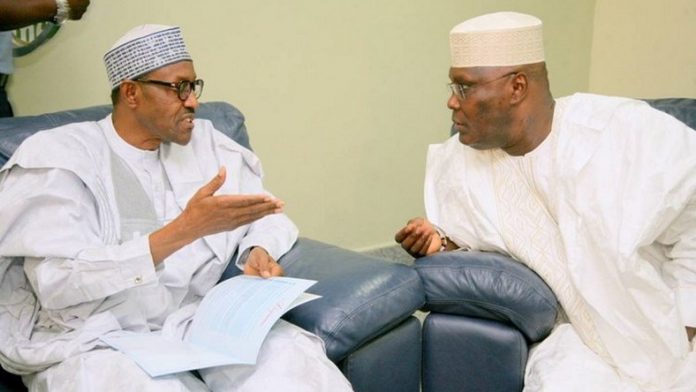 The behaviour of some educated Nigerians when it comes to national issues is outrightly incomprehensible. Must we always view critical issues within our partisan political frames rather than being broad enough to call a spade a spade and not a farm implement? Is it right to condone criminal behaviours and rationalise obvious aberrations in our polity simply because it favours you politically?

The Presidential Election Petition Tribunal (PEPT) Monday 24 June 2019, refused to grant the application filed by Atiku Abubakar and the Peoples Democratic Party (PDP) for access to inspect the server and data of smart card readers used by the Independent National Electoral Commission (INEC) for the presidential election of February 23, 2019.

And without ambiguity, the five-man panel headed by Justice Mohammed Garba averred that granting the application would imply that the tribunal had delved into and resolved the contentious issue of the existence of a central server at INEC which the commission has come out on oath to deny.

In the unanimous decision, the tribunal declined granting the application on the grounds that since parties had joined issues, the court could not at the interlocutory stage make an order that would affect the substantive issue.

In the main ruling the chairman of the tribunal, Justice Mohammed Garba, held that the matter being a substantive issue for determination by the tribunal cannot be determined at the interlocutory stage.

“Doing so would further create the impression that the tribunal had concluded that there was a central INEC server where results and data of the February 23 election were received and stored,” it was said.

The hearing of the substantive petition hasn’t started yet. The Tribunal is only dealing with pre-hearing motions first. The PDP and its presidential candidate asked to inspect the server, INEC lied it doesn’t have a server: witnesses haven’t been called by either party. So the request turned down by the panel is routine.

Hope everyone now understands what the court said and why?

Is it not surprising that even some well- educated Nigerians joined the bandwagon to support and rationalise INEC’s denial of having a backend server?  And as said by an analyst, “citizens are in a heated debate; checking up the definition of “server” from their partisan encyclopaedia.” How can we continue like this as a country?

The idea of using automated processing of votes cast predates Mohammadu Buhari as President of the Federal Republic of Nigeria. So it’s not a Buhari issue. Furthermore the use of card readers for the collation of the results of the 2019 elections featured very significantly in the public pronouncements and presentations of the INEC Chairman and his agency’s management.

So how they now turn to say they do not have servers and/or there was no server that results were transmitted to meaning no server was used for the purposes of result collation, at best remains inexplicable.

INEC has now said they have no server and “They are asking us to bring something we do not have.”Haba! And this was averred to and deposed to on oath at the Election Tribunal contrary to what the average Nigerian knows! Is this not a ridiculous explanation in a country that appropriated so much for elections? The question now is what happened to the servers INEC procured and trained its staff to use for the elections?

If card reader cannot communicate with a backend computer database, how do you accredit and validate the Permanent Voter’s Card (PVC) without such data pool? If you put a debit card in a POS machine and there is no network to connect the card to the bank data base, will the card work? So how did you accredit the PVCs without backend network database?

It would be recalled that President Buhari had, in July and September 2018, written to the National Assembly requesting for N242 billion as virement and supplementary budget to fund the 2019 general election. Out of this amount, N188.9 billion was allocated to INEC while the rest went to the Nigeria Police, Civil Defence, and other security agencies.

In October, the National Assembly approved the N242 billion supplementary budget as sent by the president – only changing the source of the funding from the legislators’ special projects votes to the Special Intervention Programme.”

The document as displayed by PLC show that INEC proposed to spend N143.5 billion on 209 items. Out of that amount, N2.27 billion was budgeted for server-related procurement items, with budget code 230808. The purpose of a computer server is simply to store, retrieve, and send information to other computers connected to a network.”

Of the amount, N1.37 billion was budgeted for nationwide replacement of servers for 25 states and National Data Centre, N99.7 million for an upgrade of the server version of OpenVR for compatibility with new Dell server, and N800 million for the migration of voter registration database from MySQL Open Source to OracleDB (both database administration services).

INEC also budgeted N157.5 million for the renewal and maintenance of cloud infrastructure, with budget code 230709.

Not only was the approval absolute, but the office of the Accountant-General reports in its “Capital Performance of the Budget” document that all of the amount (N188.9 billion) was released to INEC and spent by it.

It is true that money (over N2 billion naira) for the procurement and upgrade of servers was approved for INEC by the National Assembly and it has had a long term plan favouring the electronic storage of electoral results.

The amount was also released to INEC and the commission reported it as utilised. If the agency insists it does not have a server, then it has some explaining to do on how exactly it spent the relevant funds.

Getting this server issue in proper context will help us understand this matter better: In 2011 and 2015 elections, technology was not part of the legal framework for elections in Nigeria but the courts granted access for forensic audit of electoral materials.

But now that technology (Smart card reader/electronic voting) is part of our legal framework, it behoves on INEC to grant access to inspect all systems used. If there were manipulations of any kind of election data, it is only through forensics that such manipulations would be ascertained or disproved. So why is INEC refusing access to its electronic database?

The Judiciary as the last bastion of hope for Nigeria and Nigerians who went out to vote and believe their votes counted should not allow this server issue make us the laughing stock of the world. God bless Nigeria!