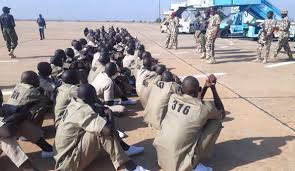 Owing to the heightened concern expressed by some members of the public on the reintegration of some Boko Haram combatants into the society, the Defence Headquarters has reassured the public that stringent measures has been put in place by the military to monitor and check their activities.

This recent  reintegration of Repentant Boko Haram combatants into society according to DHQ was a consequence of the Federal government’s program of Re-radicalisation, Rehabilitation and Reintegration of successful graduands as handled by operation Safe Corridor.

This was stated by Major General John Enenche, Coordinator Defence Media Operations while giving general update in armed Forces of Nigeria Operations from 24 July to 6 August, 2020.

Gen. Enenche reassured Nigerians that the surrendered Boko haram members were duly profiled and confirmed to be low risk and not low risk repentants, who were ascertained to be innocent and forcefully conscripted to join the sects and are categorized as victims.

According to him, Operation Safe Corridor was inline with the international best practices and is a Defence Headquarters led non-kinetic multi-agency humanitarian operation established by the presidency, backed by the law which was designed to De-radicalize, Rehabilitate and Reintegrated into the society, the willingly surrendered and repentant Boko Haram combatants in the North East.

Gen. Enenche said, the programme had recorded unprecedented achievements within the period including the kinetic approach to deal with the terrorists in the zone.

He noted that the Armed Forces of Nigeria in its operational engagement had adopted both kinetic and non kinetic operations in all the geographical zones.

This, he said was yielding positive results leading to the gradual return of peace in all parts of the country.

This he said has led to the identification of bandits’ locations and hideouts, leading to the killing of several bandits, recovery of kidnapped victims, rustled animals, cache of arms amongst others.

He further said , the concerted efforts of Operations Hadarin Daji, Katsina, Accord and Sahel Sanity had recorded more successes leading to gradual relative peace paving the way for the farming and economic activities to strive in the zone.

“Recall that the zone was hitherto engulfed with gross activities of armed bandits, cattle rustlers and kidnappers and other sundry crimes making life unbearable for locals but there’s drastic reduction of its activities due to the intensity of troops’ operation within the period.”

In the South South zone , troops of Operation Delta Safe, Calm Waters II and Swift Response have recorded giant strides through its fight against crude oil theft, pipeline vandalism and illegal oil bunkering in the zone within the period.

“Troops of Operation Delta Safe has discovered and deactivated of 25 illegal refining sites in Rivers, Cross Rivers and Akwa Ibom States, a total of 342, 000, 00 litres of product suspected to be illegally refined AGO were impounded.

“The Operations within the period had led to the seizure of 141 x 50 kg bags of foreign parboiled rice as well as arrest of boats involved in smuggling activities amongst others. ”

The DMO Coordinator also said, the Nigerian Navy Ship Delta’s non kinetic activities yielded more promising results in the zone as stakeholders of Gbaramatu Kingdom of Warri South LGA of Delta State assured to tow the path of peace after their meeting of peace and reconciliation with the military.

The peace meeting, he noted was held following recent threats to disrupt oil and gas infrastructure by the people of Gbaramatu Kingdom.

In the North-Central zone, Enenche explained that despite the normal kinetic approach to address the prevailing activities of armed militia and other associated crimes, the troops have conducted Civil Military Cooperation (CIMIC) activities in the zone.

Some of whom were the concerted Reconciliation and Conciliation efforts in the form of stakeholders’ meetings amongst the various ethnic groups in the zone which had also recorded more desired results.

“Between 30 July and 1 August 2020, Headquarters Operation Safe Haven commenced the survey for the drilling of boreholes at Shimlang community in Mangu Local Government Area of Plateau state and equally commissioned 2 other solar powered boreholes at Messiah College and Gana Ropp communities in Barkin Ladi LGA of Plateau State.

“Meetings were also held at Headquarters of Sectors 3 and 4 of Operation Safe Haven.

Gen. Enenche further said, similar meetings were done by the Headquarters Operation Whirl Stroke in Katsina-Ala Local Government Area of Benue State between the Ardo of the Fulani community and the Tiv leaders in the general area, where peaceful coexistence among others took the center stage.

He however said, troops of Safe Haven in conjunction with vigilante and Police had on 4th August, 2020, conducted a drug raid operation at Unguwar Mata and New Market General Area in Mangu Local Government Area of Plateau State where 7 suspects were arrested and a quantum of substances suspected to be Cannabis Sativa and other illicit drugs recovered.

“The suspects were subsequently handed over to police for further action.” he stated.