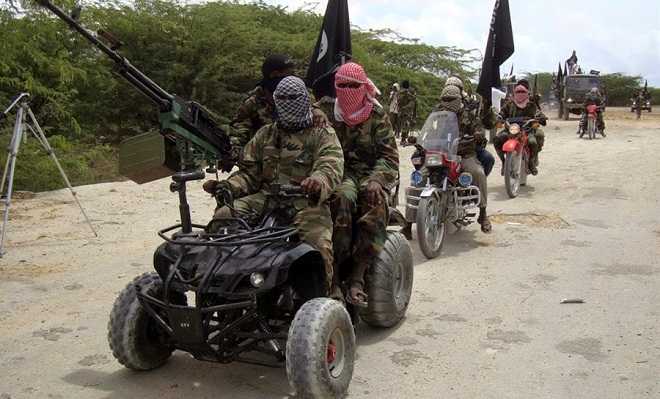 Share this on WhatsApp
Spread the love
From Tom Garba, Yola
There are indications that Boko Haram sect members are still in hiding in the Sambisa forest despite hits by the armed forces in recent times.
Vigilantes in the area revealed to National Daily at the weekend that there are caves in the forest which serve as abode to the deadly sect members and whichhad madethem to defy raids by the Nigerian Air Force, NAF, jets that bombard theplace at regular intervals to chase out the insurgents..
The  Vigilantes  who returned from Sambisa forest and revealed to our correspondent in Yola, Adamawa state capital, said there are mighty caves and structural enclaves that has never been visited by them or the military that provide fortress to the sect members.
The Chairman of the Vigilantes Group in Adamawa, Alhaji Muhammadu Usman said that  some of the insurgents are still hiding under the caves in the Sambisa forest around Gwoza, Madagali and Krichinga  border towns between Adamawa and Borno states.
He said to the best of his knowledge nobody has entered into the core of the forest adding that they are making efforts to enter and ransack every nook and cranny of the forest.
Usman said they noticed anytime that the NAF bombards the forest the insurgents normally hide inside caves and it will not have much effect on them.
Due to the mountainous nature and thickness of the dreaded Sambisa forest , he suggested that the only way out was to send foot soldiers into the forest to clear the insurgents.
He added that Vigilantes are ever ready but seek the collaboration of the military to storm the forest adding that the bombardment by the military has done a great job at reducing the strength of the insurgents encamping in the forest.
“Nobody should say that we have completely wiped out the insurgents from the Sambisa forest, ” he said.
He however expressed optimism in the fight against insurgency saying the military is making frantic effort and very soon peace would return to the region.
A female Vigilante, Mrs Adisa Tola, told our correspondent that the reason why she joined the fight against insurgency is because of her passion for peace to return to the region.
She said she inherited the profession of hunting from her late father who was a great hunter in Tola town of Adamawa State.
Adisa said she is bold as a lion adding that she has played great roles in the fight against insurgency as he alleged that the men Vigilantes cannot do the job alone without women.
Adisa said the security situation was getting better, stressing that the major task ahead was to storm the dreaded Sambisa forest which the insurgents is still using to coordinate their bombings in the cities and towns.
Share this on WhatsApp
Related Topics:
Up Next