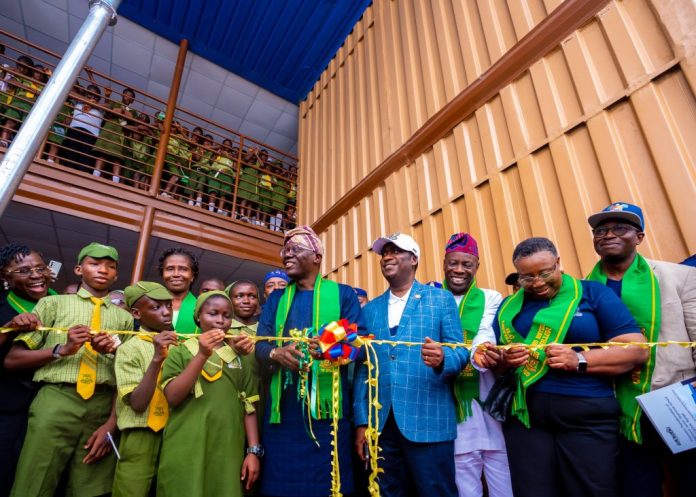 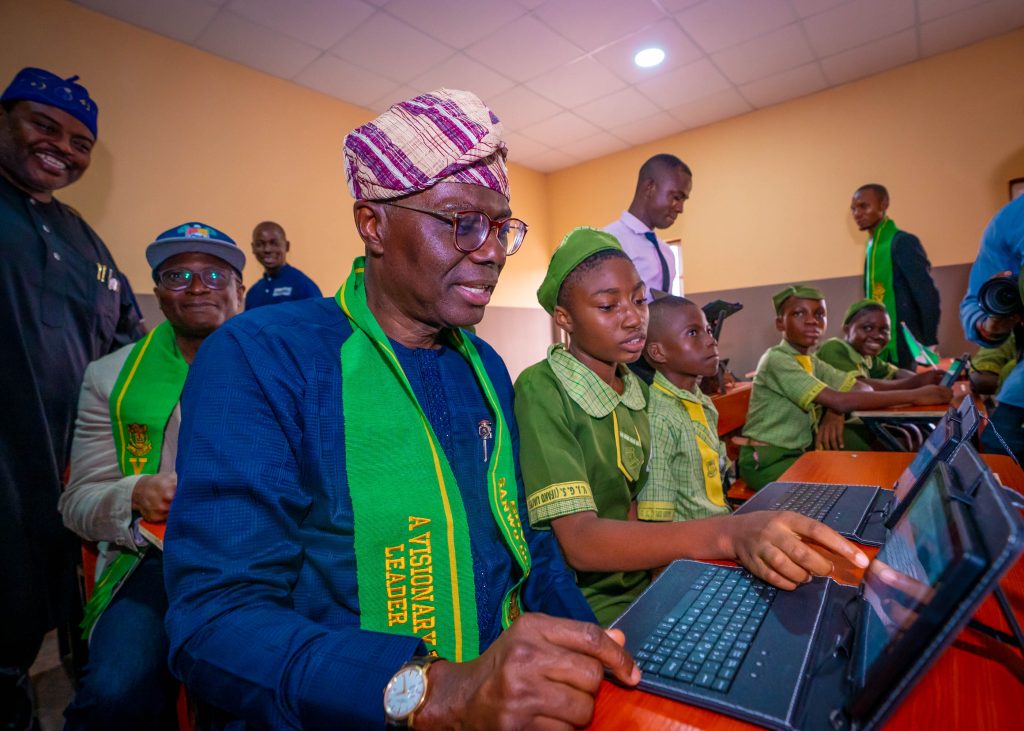 Speaking at the unveiling, Sanwo-Olu said that the nine-classroom block was built to replace decrepit concrete structures in Vetland Junior Grammar School, a government-owned model college.

Each of the classroom compartment is adequately-insulated to give comfort and create a conducive ambience for hybrid learning for children in the public secondary school.

The governor said the IT-enabled modular interactive classrooms would make a lasting impact in the state’s effort to make basic education accessible.

Aside from equipping the classrooms with interactive touch-screens, Sanwo-Olu said the pupils would be given electronic tablets to aid both in-class and virtual learning.

According to him, this is the future learning in public basic education in Nigeria and Africa.

”The development of containerised modular classrooms is a welcome milestone on our journey toward ensuring that no child is left behind in Lagos.

”Our goal, as a government, is to build learning spaces of the future, thereby bequeathing public schools that are driven by cutting-edge technology and that can compete favourably with the best schools anywhere in the world,” he said.

Sanwo-Olu congratulated all the 620 pupils who were beneficiaries of the state-of-the-art school, adding that children in public schools deserve the best quality of education to prepare them as part of a solution provider in the 21st century.

He urged the pupils to take full advantage of the opportunity to excel in their studies, so as to justify the intervention.

Sanwo-Olu said that the upgrade of the model college was part of the strategic interventions initiated in the public school system, which had led to the rehabilitation and modernisation of over 200 public schools.

According to him, so far, the administration has constructed more than 800 new classroom blocks and supplied about 150,000 units of furniture to public schools across all six education districts of the state.

He said that the intervention had scaled up output in teaching and raised academic excellence.

”We have also improved security in our public schools by installing watch towers, perimeter fences, panic bells and flood lights, and have prioritised the comfort of boarding students through the provision of beddings and other necessary items.

”As the beneficiaries can attest to, the welfare and training of teaching and administrative staff in our public school have received significant attention as well,” Sanwo-Olu said.

He urged administrators, teachers and pupils of the model college to take full ownership of the facilities provided and ensure the infrastructure was maintained.

The state Commissioner for Education, Mrs Folashade Adefisayo, said that the feat was another promise kept by the governor.

She said that the model college deserved the gesture, given the academic excellence it had turned out in national examinations over the last three years.

”This is an iconic building that will last for ages and transit our children into the 21st century-based knowledge,” she said.

The entire project was conceived and delivered by the Special Committee on Rehabilitation of Public Schools (SCRPS) set up in 2019 by the governor to implement interventions designed to improve access to basic education.

Giving more details on the structures, the SCRPS Chairman, Mr Hakeem Smith, said that the containerised structures were raised on high density rafts, carefully calculated to hold both live and dead loads.

Smith said the floors were made of terrazzo material for durability, adding that 30 convenience facilities were fitted in the academic area, while two composite toilets, which were water-free, were built for visitors and security guards.

He said the school was also rebuilt with a water system fitted with a filtration compartment to deliver potable water to the students.

The project was completed with three laboratories and four staff rooms – all made from container. There are also recreational facilities, including a five-aside football pitch, a multi-purpose-built court, which can be used for a variety of games, such as volleyball, long tennis, badminton, and basketball.

The classrooms and their ancillary facilities have their dedicated energy source, off grid; they are powered by solar panels, which guarantee constant power supply to enable teaching and learning.

The Chairman of the school’s Parent-Teacher Association (PTA), Mr Omoyele Akintayo, said that the feat by the state government would champion a new course of transformation in the country.

Akintayo commended Sanwo-Olu for listening to the yearnings of the parents to rebuild the school with structures that had a modern outlook.

”I cannot hide my feelings and emotions today. I am highly delighted. There is no amount of accolades and encomiums that can be adequately showered on Sanwo-Olu that will be enough to show our appreciation for this world-class innovation,” he said.