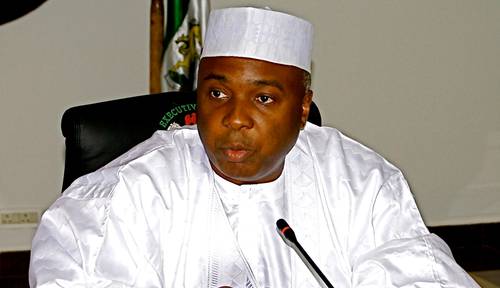 Senate President, Bukola Saraki has cited security as the main reason cameramen were restricted from gaining entrance into the senate chamber to cover the plenary.

The Special Adviser to the Senate President on Media and Public Affairs, Yusuph Olaniyonu, who spoke to a journalist via a phone conversation, said the National Assembly had nothing against the press.

He said the chamber’s gallery was still open to journalists and members of the public to observe proceedings.

The Senate, on Thursday, restricted six television stations from covering its plenary, accrediting only 13 to gain entry.

The Senate Press Corps had protested against the restriction and filed a petition to the Chairman, Senate Committee on Media and Public Affairs, Senator Sabi Abdullahi.

Olaniyonu, however, added that plenaries were usually broadcast at the Press Center and proceeding could be monitored on television.

He said, “We must restrict physical access into the chamber. It is not everybody who carries a camera and claims to be a journalist that should be allowed in the chamber. If you look at the new list of approved media houses critically, you will see that all sides have been considered – both government, pro-government, opposition stations are there.
“Some things are going on in that place, which we cannot make public in print. We can only restrict physical presence of persons in the chamber. There is even a press gallery, which all journalists have unhindered access to. There are people who pretend to be pressmen in order to gain entry into the chamber. Not everybody who holds a camera should be allowed in.”