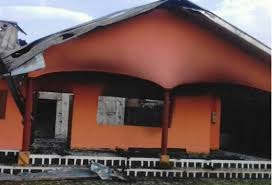 The gendarmes fighting for secession of Anglophone Cameroon from the central African country intensified their violent agitation for independence of Southern Cameroon on Sunday, when they burnt the residence of the Minister of State for the Economy and Territorial Planning. This occurred few days after the killing of a 25-year old soldier at a checkpoint.

Local newspapers quoted police sources as saying that the residence of Mr. Paul Tasong was set on fire on Sunday morning just days after he was appointed minister by President Paul Biya.

His residence had hosted friends and family members on Saturday to celebrate his appointment on March 2. The minister was not at home when the arson took place.

“The residence of the minister located at Mmockmbie, the Lebialem department, southwest region, has been set on fire. That residence hosted a thank you party on Saturday, 17 March, 2018, for his appointment to the government on March 2. Early investigations reveal that the residence was set on fire by terrorists and criminals,” a police source was cited to have said.

Last Wednesday, the secessionists shot dead a soldier in Kumba, a city in the Southwest region also known as K town. 25 years old Sardi Juvinal, a former student of Maroua high school in Cameroon’s far north, was murdered at his security post by heavily armed secessionists who have been demanding independence from the Central African country over a year.

The soldier was murdered after the expiration of a 48-hour ultimatum by secessionists to Cameroonian authorities. Last weekend, the armed activists released a video showing a government official they had kidnapped pleading for his life.

Animnom Aron, a delegate for social matters in the Northwest region, who was abducted weeks ago, was heard saying he would be killed should the government fail to show that the secessionists’ leaders, arrested in Nigeria on January 5, and extradited to Cameroon on January 28, were still alive.

Share this on WhatsApp
Related Topics:f Anglophone CameroongendarmesSecessionist
Up Next