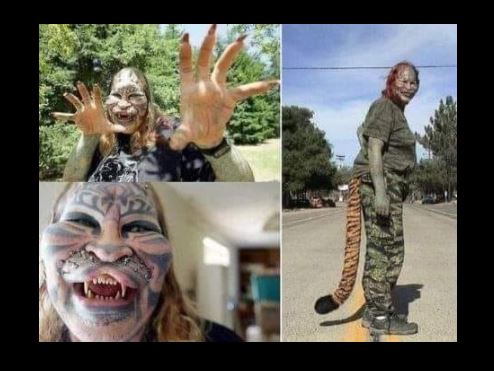 They say beauty lies in the eyes of beholder. It is normal to see animals look beautiful but going to an extent just to change your appearance just to look like that animal now becomes crazy. In what looks as an extreme modification, a man has gone ahead to modify himself using over £200,000 to look like a tiger. Denis Avner was born in August 27th 1958. He was an American known for his body modification, which were meant to increase his resemblance to that of a female tiger. For his 14 surgical procedures towards his goal, he held a world record of “Most permanent transformations to look like an animal”.

Most of Avner’s body modifications were done by Arizona based artist, Steve Haworth. While Larry Hanks in San Diego, California was the first artist who started the first modification on Avner’s body in 1985. He spend £200,000 just to look exactly as the female tiger.

Decended from the native Americans, Avner started the modification when a chief told him to ‘follow the ways of a tiger’. He then subsequently went by his native American name, stalking cat. On his now non operational website, Avner said, ” I am Huron following a very old tradition I have transformed into a tiger”. Over the years, Avner went through a series of operations to alter his appearance including bifurcation which is the splitting of his upper lip, surgical ear pointing, silicone cheek and forehead implants, tooth sharpening and facial tattoos and piercings. He also grew and painted his fingernails to look like claws.

Despite his modications, he maintained his job as a computer programmer, in San Diego California and made some television appearances more often and starred in Ripley’s “Believe It or Not” shows.

Unfortunately Avner passed on in 2012 in his garage aged 54 years. People. Believed that he committed suicide but his actual cause of death is not known yet todate.