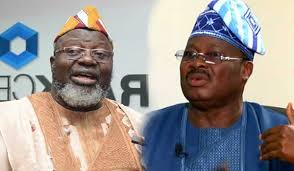 The Minister of Communications, Adebayo Shittu, at the weekend scolded Governor Abiola Ajimobi of Oyo State over the conduct of the local government election last Saturday in the State in defiance of pending suits before the court of law.  The minister said the LG election was a charade.

Shittu on Sunday in Ibadan acknowledged that there were two suits pending in court on LG election in the state, saying that the court would soon decide if the election was valid.

“The council poll is a travesty of justice and a violation of the spirit of democracy. It is self-serving and aimed specifically at the gubernatorial primaries of the party,” Shittu had said.

The minister said he wondered why the Governor was in a rush to conduct the poll, “which he never did in seven years of his administration.” He was, however, if the view that Ajimobi’s target was to have elected chairmen on ground, knowing well that they would be “automatic delegates.”

It was gathered that APC won all the chairmanship and councillorship positions in the 33 Local Government Councils and 35 Local Council Development Areas.

Shittu said that the two pending cases on the election were filed in Abuja and Ibadan.

“I am happy that we all are in the state and saw that the generality of our people ignored the election, despite the fact that we in the Unity Forum did not instruct people to do so.

“We will not sleep, rest on our oars, be cowed, or submit to injustice or impunity. We will not,” he had stated.

Shittu maintained that peace can only be achieved when there is justice in the polity.